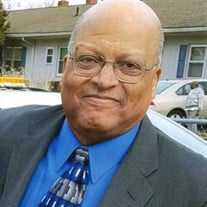 GLENN ELLIOTT CARTER departed this life on Saturday, January 1, 2022, to go be with our Lord and join his parents and grandparents.He was born in Baltimore, Maryland on January 15, 1952, the son of the late Charles Henry Carter and Drucilla W. Carter. He was predeceased by his paternal grandmother, Rosetta Lemon and his maternal grandparents, Catherine and George Johnson. Glenn attended Baltimore County Schools and graduated from Woodlawn Senior High School in June of 1970. After graduation he went to work as Manager at White Coffee Pot Jr. Woodlawn, Maryland where he met his brothers-like, lifelong friends. He also worked at North Charles General Hospital as Unit Secretary for 10 years. Glenn then switched his occupation to work at Johns Hopkins Hospital as a Security Guard where he stayed for 15 years until his passing. Glenn built his life around so many exciting hobbies and great adventures with family and friends. Those included playing basketball, football, tennis, racquetball, cycling, photography and attending auto shows. However, his real passion was skiing. He took numerous skiing trips with his brother and lifelong friends and family. Glenn, like his father and brother, was a patient, loving, a caring of others type of guy. A God-fearing man that enjoyed life, Glenn took pride in his job – working hard and protecting others and keeping them safe. His ultimate goal was to protect, support and love his younger brother, Roger. He leaves to cherish his committed life and life-long memories: his brother, Roger Carter; brother-in-law, Reginald Stroud; Aunt Marg Elliott; cousins, Jeannette and Rufus Galloway, Gwendolyn Chapman, James Elliott, Wayne Elliott, Diane and Charlotte Elliott, Lisa Elliott-Conners and Bill Elliott. He also leaves to mourn his brother-like, lifelong friends, Sonny Weems, Rudy Jackson, Michael Deborja and their families. There are a host of friends and co-workers that will feel the pain of his passing, but we all know he is and will always be in our hearts. Rest in Peace, Glenn.

GLENN ELLIOTT CARTER departed this life on Saturday, January 1, 2022, to go be with our Lord and join his parents and grandparents.He was born in Baltimore, Maryland on January 15, 1952, the son of the late Charles Henry Carter and Drucilla... View Obituary & Service Information

The family of Glenn Elliott Carter created this Life Tributes page to make it easy to share your memories.