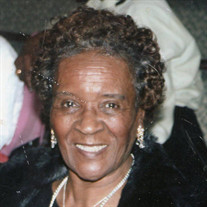 GLADYS INABINETT was born on December 12, 1929 in Baltimore, Maryland to the late James C. Webb and Pauline Yates. She was called home to be with the Lord on Wednesday, October 6, 2021. Ms. Gladys received her education in Baltimore City Public Schools. She attended Temple Baptist Church where she was baptized and accepted Christ as her Divine Savior and also sang on the choir. She continued her Christian walk at Greater New Hope Baptist Church where she was a faithful servant on the usher board, helping to feed the homeless and served wherever there was a need. She loved attending church, hearing those heartfelt spirituals of “The Battle Is Not Mine, It’s The Lord’s”, “Blessed Assurance”, “When I’ve Gone The Last Mile of The Way” and so many more. On May 5, 1961, she married the love of her life, Gilbert A. Inabinett (who preceded her in death). Ms. Gladys enjoyed life to the fullest. She would light up any room with her laugh and fun-filled spirit. She really enjoyed entertaining family and friends, cooking, dancing and just having a great time with her children and all the grands. She was known as a classy lady and wore multiple hairstyles. She made numerous friends wherever she went and will be sincerely missed by everyone who knew her. She worked numerous jobs, in the earlier years at the Silver Rail as a bartender, Sheppard Pratt and Johns Hopkins ER for over ten years from which she retired and received a recognition award as an “Outstanding Employee”. She is preceded in death by husband Gilbert Inabinett; grandchildren Rayla N. (Webb) Key, Dante D. Webb and Gregory D. Brock; sisters Rita Woodard, Thelma Jeffries and Doris Yates; and brothers James Webb Jr. and Wallace Webb. Ms. Gladys, also known as Mother, Ma, Mama, Grandma, Sis, Aunt, leaves to cherish her memory: seven children — three sons, Theodore Webb, Rickey A. Webb of Pittsburgh, Pa. and Gilbert Inabinett of Baltimore, MD and four daughters, Aletha (“Lisa”) Webb of Pittsburgh, PA., Brenda Webb, Denise Pauline Webb and Stacey R. Inabinett all of Baltimore, MD; grandsons, Laforest Webb, Rickey Sheppard, Rayon Sheppard, Rodney W. Deaver Jr., Terrance C. Key and Travon Inabinett; granddaughters, Erica Inabinett, Jessica Inabinett, Shantia Dorsey, Reketa Webb and Abrielle Vincent; thirtyfour great-grandchildren and three great-great-grandhchildren; one brother, Franklin Webb; a longtime friend, Bobby; and a host of nieces, nephews, other relatives and friends

GLADYS INABINETT was born on December 12, 1929 in Baltimore, Maryland to the late James C. Webb and Pauline Yates. She was called home to be with the Lord on Wednesday, October 6, 2021. Ms. Gladys received her education in Baltimore City Public... View Obituary & Service Information

The family of Gladys Inabinett created this Life Tributes page to make it easy to share your memories.

Send flowers to the Inabinett family.