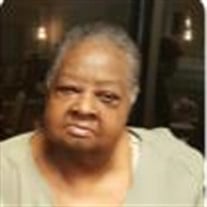 Gladys Helena Berry was born on April 27, 1940 in Baltimore, Maryland, She was the second daughter born to the late Ella Watkins and Melvin Berry, Sr. Gladys was a good student, receiving her formal education in the Baltimore City Public School System and life experiences taught her so much more. She loved enhancing her mind by reading, doing word puzzles, and watching “Jeopardy”. Gladys read the newspaper every day. Gladys accepted Christ at an early age and shared her faith with her children, Reginald, Leonard, Stephen, Raymond “Chicky”. Sheila. And Ronald “Eyes”. She met the love of her life, George “June” Scott. In the late 1950s. Gladys worked several positions as a day worker to support her young family, She took a position at ADM (Harte-Hanks) and after many years of service Gladys retired for medical reasons due to the impact of Myasthenia Gravis (a form of multiple Sclerosis). She may have retired from the workplace, but Gladys continued to work for the people who mattered to her. Gladys is the known for her common sense. Gladys was the mother of the neighborhood. She was the “Bea Gaddy, Mother Theresa, Chef Boyardee, Dear Abby and so much more Family, Friends. Neighbors, co-workers and others often sought her thoughts and ideas on life matters. She was a great listener and would give opinions without judgement. Gladys transitioned from this life on Sunday, June 20, 2021. She was proceeded in death by her husband , George; sons, Leonard, Stephen, and Ronald, grandson Tony and granddaughter Trina. She leaves to cherish many wonderful memories, her devoted daughter Sheila: sons, Reginald Sr. and Raymond: granddaughters Stacy, Rena, Sonia, Rhonda, Danielle, Shaneka, and Patrice; grandsons. Edward, Reginald, Jr. Stephen, Jr and Raymond, Jr., 38 great-grandchildren, and 16 great-great-grandchildren, devoted friend Johnnie Lee Alston: along with a host of nieces, nephews, adopted children, grandchildren, and friends.

Gladys Helena Berry was born on April 27, 1940 in Baltimore, Maryland, She was the second daughter born to the late Ella Watkins and Melvin Berry, Sr. Gladys was a good student, receiving her formal education in the Baltimore City Public... View Obituary & Service Information

The family of Gladys H. Berry created this Life Tributes page to make it easy to share your memories.

Send flowers to the Berry family.