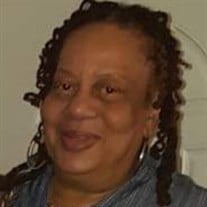 Gertrude Elizabeth Foreman Seward, affectionately known to her children and grandchildren as "Gerty" and to others as "Liz," peacefully transitioned and began her new life in her eternal hope on Monday, June 14, 2021. She was born on December 12, 1953 to the late William R. and Dora Foreman in Chesapeake, Virginia. Liz was raised in a Christian home where church was a priority. At an early age, she joined Rehoboth A.M.E. Church in Chesapeake, Virginia, where she started her Christian journey. Liz was educated in the Chesapeake, Public School system. She was also predeceased by her loving daughter, Juanita Michelle Seward. She moved to Maryland to build her own life which included her two sons and daughter who made her a grandmother at an early age. She struggled, as anyone would, by herself in a new place. One of her struggles was drug addiction. After her daughter's untimely death, she decided to make a change. She checked into Tuerk House Treatment Center in August of 1999 and there she became free of the drug addiction. She would have celebrated 22 years of sobriety in August 2021. Additionally, she became a devoted member a the Empowerment Temple where she served in the choir ministry. She was a faith-filled and God-fearing woman and she worked faithfully in its Kingdom building. This experience allowed her to embrace her purpose by becoming a counselor. As a counselor, she assisted people at Tuerk House, Mountain Manor, Sharp, Greater Grace, Eva Life Giver and New Hope to name a few. Her service as a counselor was characterized by her patience, loving-kindness, care, and dedication. Her loving heart and giving spirit resonated wherever she was and she worked tirelessly to help others. Liz loved her family and she loved to laugh and play cards Her loving personality and faith in God along with her ability to persevere will always be remembered by family and friends. She will certainly be missed. To God be the Glory! Our loved one has certainly earned her wings! She leaves to cherish her sons Miguel Wilson and Steven (Monique) Washington; grandsons Sean Seward, Jeffrey Johnson, Maliq Wilson and Trystan Washington; granddaughters Jonae Speed, Mekiyahh Wilson, Tyler Wilson, Saniya Washington, Ayanna Morris, Destiny Washington and McKenzi Wilson; great grandchildren Stephon Seward, Nitaliyah Steward, and Jayceon Johnson; brothers Rev. Michael (Phyllis) Foreman, Joseph (Lola) Foreman, William (Brenda) Foreman, Theron (Marilyn) Foreman and Gary Foreman; sisters Emma Lee Rodgers, Magdaline Parsons and Debra Ann Coleman; and a host of nieces and nephews, extended family and NA family.

Gertrude Elizabeth Foreman Seward, affectionately known to her children and grandchildren as "Gerty" and to others as "Liz," peacefully transitioned and began her new life in her eternal hope on Monday, June 14, 2021. She was born on December... View Obituary & Service Information

The family of Gertrude E. Seward created this Life Tributes page to make it easy to share your memories.

Send flowers to the Seward family.