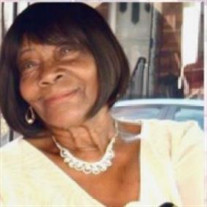 Gertrude May (Gertie) lemon departed this earthly life and was welcomed into her Savior's arms on Friday, December 24, 2021. She told her family that she was "holding on". She was waiting to hear the words, "Well Done, Thy Good and Faithful Servant." She was 85 years old. Gertie was one of five children born to the late Earl, Sr. and Lucille (Miller) Goodwin on May 11, 1936, in Santee, South Carolina. In addition to her mother and father, she was preceded in death by her husband, Joseph "Joe" Lemon, her oldest daughter, Patricia "Patsy" D. Jordan, her youngest sister, Evelyn A. Mellerson, and two brothers, Preston and Joseph Goodwin. Gertie moved to Baltimore, Maryland at the age of three. She received her education in the Daniel A. Payne Elementary School #121 and Harvard Johnson Junior High School. As a young woman, Gertie held various jobs. To name a few, Maryland General Hospital and National Security Agency (NSA). She retired from NSA in 2001, after more than 25 years of service. Gertie met and married Joseph "Joe" Lemon. They were married for over 30 years until his death on December 24, 1988. From that union God blessed them with six children. Gertie was a loving wife, excellent mother, and homemaker and often boasted about how "nice looking and intelligent" her family is. She dedicated her life to caring for her family. She took pride in babysitting her grandchildren, and great - grandchildren, hosting Sunday dinners which include hot, crispy fried chicken and stewed chicken with rice, making her "Crisco" laced pancakes, and spending time with her family and friend on her front porch. Gertie's sweet, caring, and compassionate spirit was evidence of her relationship with the Lord. She received her spiritual upbringing at the Jones Tabernacle Baptist Church under the pastorate the late Reverend Arthur D. Jones and Reverend Arthur E. Jones. In 2008, she continued her walk with Christ at the Tabernacle of the Lord Church (formerly known as Jones Tabernacle Baptist Church) under the leadership of Reverence C. Guy Robinson. She was ;;dedicated and faithful member as she participated in many activities in the church serving with the Adult and Senior Ushers and numerous choirs throughout the area. She was a Proverbs 31: 10 - 31 virtuous woman. Gertie was also a devoted aunt and friend. She had a heart for all people and was noted for her willingness to help other in any way. She welcomed many into her home for meals, lodging and fellowship. People genuinely loved and appreciated her and adored her beautiful smile. Gertie was an outspoken woman; some of her favorite sayings to her family were, "Don't tear up my barn (house)..; Ya'll don't do that at ya'll house..; Ain't that something..; Thank God I don't have no ugly children or grandchildren..; Ya'll need to turn them video games because its raising my electricity and will break my T.V...; and last but not least, I'm holding on, thank God..." However, despite her many sayings, she will always be remembered for her generosity and kind heartedness. She was a woman of prayer and great faith. She leaves to cherish her beautiful memories; four sons Willie Fulton, Jr, Harrison and April Lemon, Alonzo Lemon, Gregory and Shirley Lemon; one daughter Valerie and Richard Gainey; 19 grandchildren, 27 great-grandchildren, many great-greatchildren; one sister, Rosalie Felder; one aunt Carrie Mae Johnson; one brother- in-law, Willie and Gertie Mae Session; and a host of nephews, nieces, other relatives and friends.

Gertrude May (Gertie) lemon departed this earthly life and was welcomed into her Savior's arms on Friday, December 24, 2021. She told her family that she was "holding on". She was waiting to hear the words, "Well Done, Thy Good and Faithful... View Obituary & Service Information

The family of Gertrude May Lemon created this Life Tributes page to make it easy to share your memories.

Gertrude May (Gertie) lemon departed this earthly life and was...

Send flowers to the Lemon family.