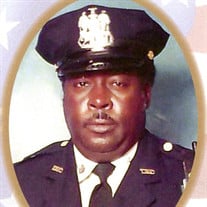 GERRY McCALL, son of the late Charles Thomas, Jr. and Sarah McCall Bonner and stepfather, Nathaniel Bonner was born on January 6, 1941 in Baltimore, MD. He departed this life on February 23, 2021. He received his educating through Baltimore City Public Schools. After graduation, at 18 years young, Gerry enlisted in the Army to serve his country. He grew to the tank of specialist and transferred to the Army Reserve Unit in 1961. Choosing to serve his country part time. He decided to join the Baltimore City Police Department on November 1, 1962. He received an honorable discharge from the Army in 1965 after serving six years and was awarded the Good Conduct medal. He loved policing the streets and protecting the communities of his hometown and did so far 27 years until retirement on December 22, 1989. In the midst of serving his country and his city Gerry took time for self and along the way he earned an Associate in Arts degree from the Community College of Baltimore in 1975. Although Gerry never married or had children of his own he remained the caregiver for many and for that he remains loved dearly. He was a brother, uncle, cousin, and devoted family man. He leaves to mourn five living siblings, Pinkney Nathaniel Bonner, Carolyn Bonner, and Ira Bonner; stepbrothers, Lawrence and Anthony Taylor. He has now joined in heavenly arms with sibling, Vivian Bonner, Henrietta Hester, Cedric Bonner, Barbara Bonner, Natalie “Moochie” Bonner Geraldine Bonner, Amy Bonner, Lee Avery Stavies and stepsister, Jacqueline Taylor. He also leaves a host of nieces, nephews, grand-nieces and grand nephews, other relatives and friends.

GERRY McCALL, son of the late Charles Thomas, Jr. and Sarah McCall Bonner and stepfather, Nathaniel Bonner was born on January 6, 1941 in Baltimore, MD. He departed this life on February 23, 2021. He received his educating through Baltimore... View Obituary & Service Information

The family of Gerry McCall created this Life Tributes page to make it easy to share your memories.

Send flowers to the McCall family.