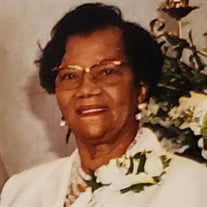 Georgia Irene Braxton, 98, the youngest of 10 children born to George and Amanda Smith of Hartwell, Georgia, transitioned from labor to reward on Wednesday, March 16, 2022. Affectionately known as “Mickey” by many of her patrons, Georgia was a serial entrepreneur. She was the proprietor of “The Sock Shop,” which was located on 25th Street in Churchill and West Broad Street in Richmond, VA. She blazed a trail for many Black women by investing in real estate and providing affordable housing to Richmonders for several decades. Upon her “retirement,” she earned a nursing certification and opened her Glen Allen, VA home to disabled veterans whom she cared for until she moved in with her daughter and son-in-law, Jackie and Sam Harris. Georgia is survived by three (3) children, Brenda Van Ness Boone (Azariah), Jacquelin Harris (Samuel), and George P. Braxton (Kelly); seven (7) grandchildren, LaTanya Edwards (Marvin), Ronald Nash, Jr., Jerry Shelton, Jr. (Shawanda), Tiffany Winston (James), Daniel White, Jr., Miles Q. Braxton, and Harris B. Braxton; and fourteen (14) great-grandchildren. She is preceded in death by her former husband George P. Braxton, Sr., and her nine (9) siblings. Georgia was blessed with a “green thumb.” She could turn a twig into a jungle with water and her love. Her homes were known for their immaculate lawns and gardens. Later in life, she became an avid sports spectator and traveler. She loved the Washington Redskins (Commanders) and the San Antonio Spurs, and visited sites from Florida to Canada on several occasions.

Georgia Irene Braxton, 98, the youngest of 10 children born to George and Amanda Smith of Hartwell, Georgia, transitioned from labor to reward on Wednesday, March 16, 2022. Affectionately known as &#8220;Mickey&#8221; by many of her patrons,... View Obituary & Service Information

The family of Georgia "Mickey" Braxton created this Life Tributes page to make it easy to share your memories.

Georgia Irene Braxton, 98, the youngest of 10 children born to...

Send flowers to the Braxton family.