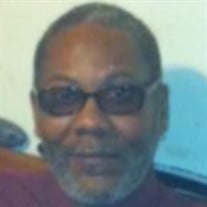 George Tyrone Mondie was born on March 10, 1957, in Baltimore, Maryland. He departed this life on October 18, 2021. George attended Polytechnic Institute in Baltimore City, where he was a dedicated member of the marching band. After high school, he followed in the footsteps of his older brothers and entered the United States Air Force where he earned his higher education degree in Nursing and later in Culinary Arts. You could often find George in the kitchen cooking food at any hour of the day or night. George worked in restaurants in the city. Most recently before the pandemic, George could be found serving as Chef Cole's Sou Chef at The Club at Collington. George accepted Christ at an early age and at the time of his passing was a member of Trinity Baptist Church. He was on the usher board and worked with the Sunday school. George enjoyed the simple things in life-watching Star Trek, getting the latest movies from his older brother, and drinking cherry Kool-Aid. George also loved to work outside in the yard and could often be found helping neighbors by cutting their grass or raking leaves. George is survived by his sisters and brothers Vanessa, Kimberly, Joseph, Sherman, Walter, Courtney; sister-in-law Joyce; nieces and nephews, Joseph, Carlos, Stephanie, Miko, Chelsea, Naomi, Cheryl, and Sandy, Millicent; a host of family members and friends. George was preceded in death by his parents Sweetie and Walter, his sister Australia, an brother Miko.

George Tyrone Mondie was born on March 10, 1957, in Baltimore, Maryland. He departed this life on October 18, 2021. George attended Polytechnic Institute in Baltimore City, where he was a dedicated member of the marching band. After high... View Obituary & Service Information

The family of George Tyrone Mondie created this Life Tributes page to make it easy to share your memories.

Send flowers to the Mondie family.