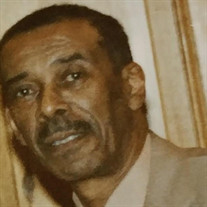 George Theodore Johnson Jr. a Baltimore educator, artist, soldier, baker, printer, gardener, photographer and sportsman departed this life February 28, 2021 at the age of 93. The son of George Sr. and Lillian Johnson, George was born May 15th and raised in Baltimore, Maryland where he received his education in Baltimore City Public Schools. He was a proud graduate of the historic Frederick Douglass High School. He met his first wife Kathleen Amelia Wallace in elementary school. The couple secretly married in High school and lived with their parents until George’s mother overheard their friends celebrating their anniversary. Once the marriage was publicly announced, the couple lived with George’s mother while George completed his service in the U.S. Army. After an honorable discharge from the Army, George attended and graduated from Hampton University in Virginia. While George was attending Hampton, Kathleen gave birth to their daughter Gayle. After graduation, George worked for the Baltimore Afro Newspaper as a printer and taught in Baltimore City Schools until his retirement. He was loved by students from both William H. Lemmel Junior High School and Carver Senior High School where he mentored students and provided job counseling. Many former students remained in contact with him until his death. George also taught the Art of Print Instruction at Coppin State University, a renowned historically black college and university (HBCU). George and Kathleen divorced and George married his second wife Gertrude (“Gert”) Antionette Edwards who became a loving stepmother to his daughter. During their 63 years of marriage, they enjoyed Shooting Sports activities such as Archery and Fire Arms. The couple also shared a love for bowling and participated on various teams at Colt Lanes and Timonium Lanes every week until their health prevented them from doing so. George also enjoyed fishing and that prompted him to purchase a boat and construct a pond in his back yard. We will always remember the fish he caught in the Chesapeake Bay and brought home in a cooler only to be found swimming in the cooler the next morning. He transplanted the fish to the pond with his goldfish where the fish lived for many years. His goldfish were more than a foot long. To preserve his fish, they built a pond in the basement of the house for the winter months. Considering that he loved the rare breed of Siamese cats, his beloved Mitten, Mitten 2, and Mitten 3, having those fish living in the house was a statement to his love of nature and animals. George also loved photography. He was known to take pictures everywhere including the Inner Harbor, the Baltimore Balloon Preakness Festival and the Baltimore Conservatory, now known as Howard Peters Rawlings Conservatory. He also started his own photography business, taking pictures of weddings and parties around Baltimore. George enjoyed drawing and often incorporated his artwork with his photographs. His versatility with his artwork included making tee shirts, cards and event programs. George was also a superb baker and according to family and friends made a pineapple upside down cake that was second to none. The cakes were the highlight of the Thanksgiving and Christmas dinners shared by his daughters; nieces and grandnieces; and cousins. George and Gertrude shared a love of flowers. Their appreciation for flowers was reflected in their home garden and house plants. All visitors were amazed with the garden and their garden was the subject of discussion in the community. In George’s later years his love for fishing, plants and bowling was satisfied by the cable channels featuring nature and animal shows, bowling, and fish from all over the world. George was a football fan and was known to sit in his “Red Recliner” for hours. Although not a conversationalist, George loved the telephone calls he received from family and friends. The calls were the highlight of his day. George and Gert also loved visiting casinos on the East Coast with the Bernard E. Mason Senior Club. After Gert’s death, George and Gayle visited the Horseshoe Casino weekly where he met many of his friends during what was affectionally known as the “Senior Hour “at 10 am in the morning. George was truly a renaissance man and lived his life to the fullest. George is survived by his daughters, Gayle and Toni, granddaughter Kendall, great granddaughter Regan and his beloved great grandniece Naja; many nieces and nephews; special friends Roslyn, Chena, Sixto, and Mererda; and a host of friends.

The family of George T. Johnson Jr. created this Life Tributes page to make it easy to share your memories.