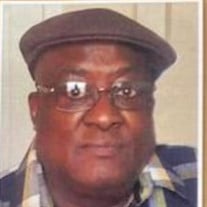 GEORGE ARTHUR FERGUSON was born on June 20, 1946 in Baltimore, Maryland to the late Cleveland and Edith Ferguson. He was the ninth of ten children. He departed this life on April 20, 2021. George was affectionately known as Daddy, Grandaddy, Pop-Pop, Pops, Godfather, and of course "Sausage." He received his education in the Baltimore City Public School System. George was a very hard worker and worked for years at Lacy's Foundry until the plant relocated. He then went on to work for the Monarch Rubber Company for a number of years until he retired. In 1982, George married the loved of his life the late Margaret Louise Ferguson. George loved spending time with his family and friends and would do anything for them. He was a jack-of-all-trades. He was a chef, a comedian, agitator, wise-cracker, and handyman; he was actually more like a MacGyver. He could fix almost anything. He was a very good cook and loved to cook for his family and friends. Some of his most notable dishes were his shrimp fried rice, pork yat gaw mein, cabbage, ribs, and fried potatoes. he loved going to the casinos and playing the lottery. He also loved watching sports such as boxing, the Orioles and the Washington Wizards. He especially enjoyed watching his beloved Baltimore Ravens play alongside his road dog (sister-in-law) Jamila Henry and son George Sr. He had a special place in his heart for his grand-kids, great-grand-kids, as well as others and they all loved him back. On his old block, the 1800 block of N. Belnord Street, he was known as the "Mayor." He leaves to cherish his memory: his sons, George A. Ferguson Sr. and Anthonio Henry Sr.; his daughter, Michelle Sears; his daughter (Niece), Valerie Malone; his adopted daughter, Katrina Burris; his devoted goddaughter, Ramona Boyd; siblings, Earnestine Ferguson (Tine) and Margaret Beverly; sisters-in-law, Christine Ferguson , Patricia Williams, and Jamila Henry; brothers-in-law, James (Kim), Anthony (Myra), Warren and Andre Henry; fifteen grandchildren, seventeen great-grandchildren, and a host of nieces, nephews, and other relatives and friends. Preceding him in death are his devoted wife Margaret, his daughter Sherese, his son Decarlo, his sister Mary Elizabeth Ferguson, and his Brothers Robert Holmes, Cleveland (Buddy), John (JC), Robert (Bo), Milton and Leon Ferguson.

GEORGE ARTHUR FERGUSON was born on June 20, 1946 in Baltimore, Maryland to the late Cleveland and Edith Ferguson. He was the ninth of ten children. He departed this life on April 20, 2021. George was affectionately known as Daddy, Grandaddy,... View Obituary & Service Information

The family of George Ferguson created this Life Tributes page to make it easy to share your memories.

Send flowers to the Ferguson family.