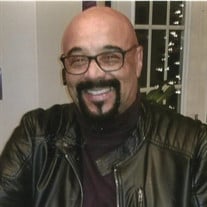 George Franklin Davis, also known as "Cheetah", departed this earthly life after a brief illness on Wednesday, April 6, 2022. He was the second of six children born to the late Phenel and Ethel Davis in Drakes Branch, Virginia. He was preceded in death by his beloved wife, Delores Antoinette Davis; two younger brothers, Ernest Davis (aka "Pug) and Leslie Davis. George's parents moved from Drakes Branch to Richmond when he was 10 years old where they lived in the Church Hill area of the city. George accepted Christ at an early age in Drakes Branch and joined St. Paul's Baptist Church in Henrico County later in life. He was educated in the Richmond Public School system at the Technical Center where he sharpened his knowledge of automotive mechanics. His love of automobiles, trucks, boats, motorcycles, and classic cars began at an early age. Throughout his life, he was known for always having nice cars that he made sure to keep immaculately clean and sparkling. He started his truck driving career at Chavis Transfer and then moved on to work for BFI, Miller & Rhoads, Epes Transport System, and finally Stratton Metals, where he retired in 2018. He also worked for himself for many years as an owner-operator of his own tractor-trailer truck. George was extremely proud of his over 1 million miles safe driving record and could often be seen wearing his jackets that displayed his impressive driving records and achievements. As he grew his fleet of classic cars, he joined the Richmond Metropolitan Antique Car Club where he served as Chapter Treasurer for many years. He enjoyed the camaraderie of the club often participating in many of the club parades. He later became a member of the Street Dreams Cruisers club where he developed many deep, lifelong friendships with several club members. George's sharp wit, warm smile, and kind spirit naturally drew people to him. Conversations with him were never short, and he loved a good laugh. He was a good friend to many and he was a good husband, father, brother, uncle, and cousin to his extended family . He will be greatly missed by all who knew him. Left to cherish his memories are his four children, Angel Carney (Corey) Ronnette Anderson (Steve), Jerrell James,and ShaRon Parker (Trina); four grandchildren, Corey Carney, Bryce Anderson, Zoe Carney, and Brandon Anderson; three siblings,Florence Taylor (McCoy), John Davis (Renae), and Sandra Davis; many nieces and nephews; one devoted, Cheryl Love, and a host of family and friends including devoted friend, Deborah Butler.

George Franklin Davis, also known as "Cheetah", departed this earthly life after a brief illness on Wednesday, April 6, 2022. He was the second of six children born to the late Phenel and Ethel Davis in Drakes Branch, Virginia. He was preceded... View Obituary & Service Information

The family of George F. Davis created this Life Tributes page to make it easy to share your memories.