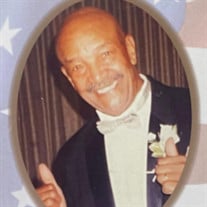 His Life GEORGE ROOSEVELT COLBERT, SR., son of the late Charles Colbert, Sr. and Annie Mays Colbert, was born on July 23, 1933. He attended Baltimore City Public Schools while living on the east side of the city. George Sr. enlisted in the U.S. Army from 1953-1955. He later went on to graduate from the University of Baltimore. His Love George Sr. met and married the love of his life Rebecca in Baltimore and from that union came Bridget and George Jr. They lived in Baltimore for several years before moving to Glen Burnie, Maryland. They enjoyed life and had fun with family and friends for many years together until Rebecca went home to be with the Lord in 1998. His Passions Anyone who knew George Sr. knows that he was an avid Baltimore Orioles and Ravens fan. He could often be found in rousing discussions and quoting stats on his favorite teams. Overall he was a sports enthusiast and enjoyed watching the game while playing cards with friends or gathering at a local social venue. He also enjoyed reading the newspaper and watching news media, he could expound on history and stayed up to date with current events. He was a wealth of knowledge and loved to share. There was great joy in his expression whenever he was around family. Whether it was a barbeque, a birthday party or just plain catching up, he loved to be with his children, nieces, nephews, grandchildren and great-grands. He loved to entertain and never failed to please. His Legacy Today his legacy lives on in the teachings and traditions he has instilled in his family: his brother, Donald Colbert of Baltimore; his daughter, Bridget and his son, George Jr. (Demetress); his grandchildren, Jerod, Chiquita, Chardae, Cheena and Justin; his great-grandchildren, Jayden, Gianna, Jax, Mia, Emma and Jasmine; and a host of nieces, nephews, other cherished family members and friends.

His Life GEORGE ROOSEVELT COLBERT, SR., son of the late Charles Colbert, Sr. and Annie Mays Colbert, was born on July 23, 1933. He attended Baltimore City Public Schools while living on the east side of the city. George Sr. enlisted in the U.S.... View Obituary & Service Information

The family of George R. Colbert, Sr created this Life Tributes page to make it easy to share your memories.

Send flowers to the Colbert, family.