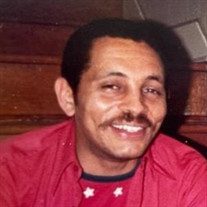 Geoffrey Weldon Pinder, retired horse trainer, died March 11 of heart failure while undergoing a routine health procedure. He lived in Temple, Arizona. He was 76. Born in Baltimore on November 14, 1945, Geoffrey Weldon Pinder was the first born of George and Bertha Pinder's five children. He was a precocious child who attended Baltimore City Public Schools. He was a graduate of Baltimore City College where he excelled in his studies. An initiate of the first pledge line of 1962, he was a cherished member of the Omicron Beta Epsilon high school fraternity. Geoffrey earned the nickname of Crazy Horse because of his love of horses. Also in his youth, he dedicated himself to the civil Rights movement as a member of the Jackie Robinson Youth Council working with Juanita Jackson Mitchell. At 18, Geoffrey joined the armed services as a paratrooper in the Army's 82nd Airbourne that specialized in parachute assault operations. He served in the Dominican Republic in the early 1960s during the rise of communism in Cuba and Central America. He narrowly escaped death in a grain silo attack. Of six soldiers in this fire fight, Geoffrey was the only survivor. This event haunted Geoffrey for decades. After his time in the Army, Geoffrey returned to Baltimore where he attended Maryland Institute College of Art and worked as a draftsman for an architectural firm. He soon married Joanne Reid and the couple welcomed daughter Stacey Donette. The couple later divorced. Bitten by the entrepreneurial spirit, Geoffrey became the proprietor of a dry-cleaning business where he employed his sisters Joy and Amelia and partner Gunda Miller. Around the same time, he became father to Geoffrey Weldon Pinder Miller and stepfather to Aaron Miller. Geoffrey's free spirit led him to pursue a passion for horses. He attended Meredith Manor Equine College in West Virginia then moved to Gilroy, CA where he worked as a horse trainer on a ranch. Geoffrey followed his passion to a number of farms, ranches and racetracks, working for some of the horse world's top breeders and owners. While Geoffrey traded in the physically demanding role of horse trainer for subsequent work as a truck driver and then a chef, he continued to feed his interest in the horse scene by viewing daily races on cable TV. Geoffrey retired to California and then to Arizona where he enjoyed the warm weather and the lore of the west. He is survived by daughter, Stacey; son, Geoffrey; stepson, Aaron Miller; his mother Bertha Taylor-Pinder, sisters, Joy Pinder-Savage, Amelia Pinder-Campbell, and Gay Pinder; long-time companion Marilyn Mitchell; four grandchildren; one great-grand child, aunts Ruby Golding and Mary Wilson, and many nieces, nephews, and cousins.

The family of Geoffrey Weldon Pinder created this Life Tributes page to make it easy to share your memories.

Send flowers to the Pinder family.