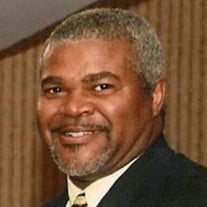 Legacy of Life "When you've done everything you can do, that's when God will step in and do what you can't do." 2 Corinthians 12:10 Gary “Buddy” Michael Smithson was a beloved son, brother, uncle, coach and friend to many. After a long and courageous battle with cancer he passed away on the morning of May 2, 2022 at the age of 58. He was born to Thelma and Richard Smithson in Richmond, Virginia on June 27, 1963. After graduating from Highland Springs High School, where he was a standout on the football field and on the track, Gary went on to serve in the United States Army including White House and Secret Service detail. Gary married Terri Letcher in 1995 and for many years they made their home in Fort Washington, Maryland. Gary retired from the military in 2001 after twenty years of service. During his time in the Military, he received his Associates degree in accounting. Many will joke that Gary also had his Masters degree in procrastination. Gary loved time spent with friends and family and will be remembered for his generosity and thoughtfulness to all. Even when he was sick, he was always concern about being respectful of others' time and never wanted to feel like a burden to those around him. He was resilient and fought, deceiving expectations to the very end. Gary enjoyed many things: fishing, following the Ravens, fixing things and finding a good bargain, but his passion was coaching track. He spent countless hours and weekends working with Track Express. His athletes will remember his dedication and his ability to push them past their comfort zone doing so with positive reinforcement. Gary was a dedicated Springer fan. staying close with many of his Springer classmates until the very end. Gary leaves to cherish his memory : beloved mother, Thelma Smithson ; brothers, Greg Taylor Angela), Paul Smithson (Margaret), and Richard Smithson (Renata) ; sisters, Gladys Brown (Paul) and Deborah Jones (Ervin); aunt, Anna Neville; nieces, Autumn, Carolyn, Chanel, Danielle, Lauren, Monisha, and Nicolette; nephews, Alfred, Brian, Davon, and Keith; a host of cousins other relatives and caring friends, including his dear friend Denise.

Legacy of Life "When you've done everything you can do, that's when God will step in and do what you can't do." 2 Corinthians 12:10 Gary &#8220;Buddy&#8221; Michael Smithson was a beloved son, brother, uncle, coach and friend to many. After... View Obituary & Service Information

The family of Gary M. Smithson created this Life Tributes page to make it easy to share your memories.

Send flowers to the Smithson family.