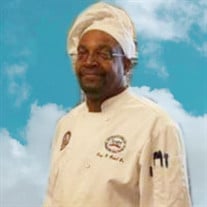 Gary Barton Hood Sr., the son of the late Joseph Hood and Josephine (Lee) Hood. He was born February 12, 1964, in Baltimore, Maryland. He was the middle child of three. Early Monday, September 13, 2021, Gary Barton Hood Sr, was called to rest. Gary received his education in the Baltimore City Public School System. He attended Eastern High as well as Northern High School. After high school Gary went into the Army National Guard then Reserves. He was a Combat Engineer and Ammo Specialist from 1982 to 1992. He later went on to receive different certifications in Culinary and Residential Plumbing. As a child Gary played baseball, basketball, and was a certified LifeGuard. He sang in the youth choir at Wayland Baptist Church in West Baltimore. Later Gary was baptized and rededicated his life to Christ after becoming a member at First Apostolic Faith Church of Jesus Christ International, Inc. Gary made friends wherever he went and will be sincerely missed by all. To know him was to love him. He was known for cooking and helping any and everyone. He was best known for cooking seafood, which he was allergic to and his famous lasagna. Gary loved his family and his Baltimore Ravens football team. He leaves to cherish is memory: his mother Josephine (Lee) Hood, his grandmother Edith Lee, his sister Pamela Tina Hood Dennis, his daughter Tiara Keona Hood, his son Gary Barton Hood Jr., his two grandsons Cruz and Cody Matthews, his granddaughter Cari Chris Matthews, his companion Tracy Brumfield, his aunts, nieces, nephews, cousins, other relatives and a host of friends.

The family of Gary Barton Hood Sr. created this Life Tributes page to make it easy to share your memories.

Gary Barton Hood Sr., the son of the late Joseph Hood and Josephine...

Send flowers to the Hood family.