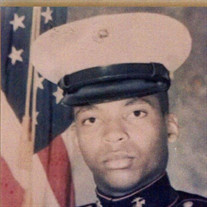 GARY LEE DAVIS SR., son of the late Wilma Jean Davis and Robert “Dad” Lee Davis, was born November 29, 1954, in Huntington, West Virginia. He departed this life on May 31, 2021, in Clarksburg, West Virginia. Gary, along with his family, moved to Baltimore, Maryland in his early years. He was educated in Baltimore City Public Schools where he joined the Junior ROTC. He enlisted and served active duty in the United States Marine Corps from October 1973 through October 1976. Gary was an energetic, intelligent, and overall “people person” that often met and had long discussions with total strangers. He would speak passionately with family and friends on politics, sports, social issues and more. You could often find him reading whatever he could get his hands on. He was a soccer aficionado and loved the Baltimore Ravens. He was a jazz enthusiast and would often play the table keyboard just like “Dad”. He also was talented on the bongos and would spend days playing in Druid Hill Park. He relocated back to West Virginia where he was proudly employed by the Veterans Affairs Hospital. Gary was honored to assist in any way possible with the “Band of Brothers” who were patients, co-workers and/or visitors of the facility. He was baptized in the name of the Father, the Son, and the Holy Ghost on January 25, 2009, at Morning Star Baptist Church in Fairmount, West Virginia. Gary was preceded in death by his mother, Wilma Jean Davis, his father, Robert Lee Davis, two sisters, Robin Rene Davis and Tracey Eloise Davis, and a grandson, Desmond Davis. He leaves to cherish his memory and celebrate his life son, Gary Lee Davis Jr. (Shantel); four sisters, Jaqueline Diane Davis, Laura Lee Davis, Vela Ann Davis, and Jeanine Marie Davis; granddaughters Da’zia and Winter; stepdaughters Felicia Harrell and Alisha Harrell, ex-wife Gloria, a best friend in West Virginia, Roger; and a host of nieces, nephews, aunts, uncles, cousins, and friends

The family of Gary L. Davis Sr. created this Life Tributes page to make it easy to share your memories.