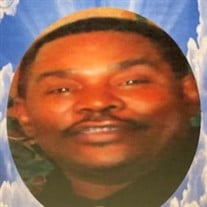 Frederick Douglas Sorrell, the beloved son of the late Maude Jackson and the late Otis Sorrell, was born December 26, 1956, in Baltimore, Maryland. Frederick entered into eternal rest and received his crown on December 27, 2021 after a long illness. Frederick was fondly called "Freddie" or just "Fred," he accepted Christ at an early age. He received his education from the Baltimore City Public School System. As a young man Fred joined the Job Corps to continue his education and job training. He worked at the Men's Health Center; then later was employed by Baltimore City Recreation and Park as a professional driver for many years before retiring due to disabilities. Fred maintained many friendships with the guys he worked with in the city yard and would visit often after his retirement. Fred was an all around type of guy, very independent, free spirited, a good soul, and a man of the town. He lived his life to the fullest, no grass grew under his feet, he understood the assignment. In his youth he helped to form the singing group called "Breeze," where they traveled all over the city performing their unique sound. Fred had a voice like the singer Phillip Bailey of Earth With & Fire, and yes he could hit that note. Fred loved the ladies and ladies loved him, after all he could sing; he was handsome with a charismatic personality. He had a smooth way of talking, sometimes in a whisper, with that twinkle in his eyes when he smiled. Fred then met the love of his life Wanda Ford, they shared so many memories with their family. Their relationship endured the test of time; through the love they shared, they became unbreakable. Things about Fred, there is so much to say about his life. Fred loved family vacation and family time. He prided himself on making fruit salad at family gatherings. You could always run into Fred at Northeast Market, which was one of his routine stops of the day. Fred was the DVD man until people got the Fire Stick & Netflix; he had all the movies. Fred was indeed the family historian, if you wanted to know who was who, he knew the connection and the story. Fred was a wise and knowledgeable man. He would question how you knew what you knew, as if your life experiences never happened. If you let him, he'd probably have you rethinking whether or not your own birthday was your actual birthday. Fred also thought he was a house doctor on call, if there was an alignment he had the remedy and the meds. Fred had alot to talk and debate about. He loved all his children and grand-children very much. The younger family members all have fond memories of their Uncle Fred, he had pet names for every one of them. He loved going over his nephew, Pee-Wee's house with his brother Anthony to play cards on the weekend, they became a pair; we started calling them "The Brothers" or "The Spades Playing Kings." Fred was loved by many; He was one of a kind and just a special person. Among those who shared his life and proceeded him in death were his Father, Otis Sorrell; Mother, Maude Jackson; Brothers, Clarence Williams, Lionel Madison, Tyrone Holmes, Jerry Holmes and Anthony Sorrell; Brother-in-law, Antar Askia He leaves to cherish his memory; His significant other Wanda Ford; Four loving daughters, Danielle Sorrell, Deshia Sorrell, Korday Sorrell and Breon Arrington; three sons Eric, Derrell Briggs, and Brandon Ford; two sisters, June Askia and Debra Sorrell; sister in law, Michelle Holmes; bonus sister, Leona Tucker; grand-children Kairi, Blair, Derrell, Tiana, Dallas, Jaden, and Dace; a devoted nephew Antwan (Pee-Wee), life long childhood friend/like a brother Kelly Vines, two devoted friends Larry Ross, and Larry Stevenson and a host of family, friends and Eastside community.

Frederick Douglas Sorrell, the beloved son of the late Maude Jackson and the late Otis Sorrell, was born December 26, 1956, in Baltimore, Maryland. Frederick entered into eternal rest and received his crown on December 27, 2021 after a long... View Obituary & Service Information

The family of Frederick D. Sorrell created this Life Tributes page to make it easy to share your memories.

Frederick Douglas Sorrell, the beloved son of the late Maude...

Send flowers to the Sorrell family.