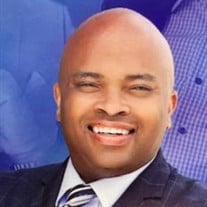 Life Reflections....Franklin Alonzia Jones We are all God's creations. Sometimes God shows His best work in nature. It seems when He created Franklin, He was going to show the world the boundless possibilities of what He could do in the creation of a man. Franklin Alonzia James was born on November 29, 1977. The blessed parents were Verna "Renee" Johnson (nee Berry) and Franklin A. James. God knew the responsibility of raising such a special gift required many here on earth. He provided the support of his stepfather, Paul Johnson and his parental aunt. O'Melia V. James. Franklin was predeceased by his loving grandmothers and great-grandmother, Elizabeth Anderson, Frankie M. James and Artchie Barber. He is glad to be with them. They are his heart. He quietly left this life on. Franklin had the spirit of Jesus in him as a young child. He was always kind, helpful and gracious. When you encounter Franklin, you knew you were made to feel special, loved and valued. Franklin's innate nature was nurtured by his church family and pastors. He was always in the fellowship, as a youth at the New Antioch Baptist Church and his final way station was the Carter Memorial Church of God in Christ Church under the leadership of Bishop Carl Pierce. He served on various ministries: The Leadership Team, the Men's Ministry, and one of the Founding Members of the Good Fellas. His first passion after his relationship with God was acting. He attended Baltimore City Public Schools. He was honored to be accepted in the Baltimore School for the Arts in the theater arts department in the Fall of 1992, completing his secondary education in 1995. He continued to pursue his craft; the first stop Shenandoah University in Winchester, VA. Then the call of the Big Apple was overwhelming. He moved on to Fordham University in New York City. Upon completion of his studies, he pursued and obtained roles, both on and off Broadway and television. However, one never knows the plans God has for you and it may be so unlike what you can imagine. Like most starving artist, until that big break, he found himself engrossed in the hospitality industry. This was clearly God's call on his life. He was able to use his gifts and talents to serve others. That humble spirit did not just stop with assisting his customers, but also his coworkers, his family, friends and neighbors to reach new heights of greatness. listen you can hear his touching words of encouragement, "Show up and show out". When times get hard and you miss him, be inspired in his memory to keep climbing higher and higher. He was so unselfish and would help anyone to reach their next level in life. Anyone who encountered Franklin, short term or long term, knew they had encountered a special person, a true gift from God to the world. Franklin's employment was vast and varied. From his coveted position, at the Windows of the World Restaurant located in the now iconic Twin Towers in NYC, Hilton Doubletree, Roland Park, Hilton-Baltimore, Pendry Sagamore Hotel, 414 Light Street Residences, to his most recent achievement at the newest Tru by Hilton in Baltimore City as General Manager. He spent over ten years in New York honing his talents, when God called him back to Baltimore where those talents could be put to even better use. Franklin leaves to not just mourn but celebrate his life,his parents, his grandfather, Thomas Reaves, his grandmother, Shirley Johnson his siblings: Rickia Wallace (m.Gregg) Kelsie Johnson, Tierra James, Jamal James, Talisha Johnson, and Travis Johnson (m.Cheryl). A role he enjoyed, "Funcle", His nieces, JuNada Davis, Amiyah Spraggins, Tasiah Edwards, Ariya Edwards and Rylie Sedgewick (the niece that stole his heart). His nephews, Joshua Daniels, Caydance Wallace. Every person who Franklin met, he loved. There are a few people who stand out, that were extra helpful to him, when he needed support. Paulette Clay (long distance cousin), Bernard Dutton (barber), Eric Holmes, McCord Henry, Guy Valerie Bosworth, Shannon Jenkins, Jen Nicole Davis, Nika Easter, and Linda Brown, (god-sister), his BFF/brother, Lance Coadie Williams and a dear special friend, Damian Owens. There are a host of other relatives, cousins, and friends too numerous to name, who additionally had influence on his life. Franklin wants to let everyone gathered, whether in the sanctuary or media, he loves you. If you must, cry a while. He is forever in your heart and memories. Let the good times engulf you. Be encouraged. He is with the Lord.

Life Reflections....Franklin Alonzia Jones We are all God's creations. Sometimes God shows His best work in nature. It seems when He created Franklin, He was going to show the world the boundless possibilities of what He could do in the creation... View Obituary & Service Information

The family of Franklin A. James created this Life Tributes page to make it easy to share your memories.

Send flowers to the James family.