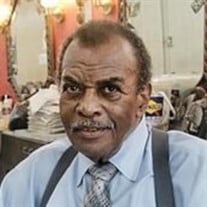 Rev. Franklin Dehart Harvey, Sr. was born March 9, 1933 to Frank and Julia Harvey in King and Queen County, Virginia. God called him home December 17, 2021. He was preceded in death by his wife Christine C. Harvey and brother Elwood Harvey. Rev. Harvey received his formal education at Central High School in King and Queen, Virginia. Rev. Harvey enlisted into the United States Air Force in 1953 and served his country proudly. He completed his time of service and was released in 1957 with an honorable discharge. He furthered his education at Turpins Barbering School and Richmond Seminary School of Theology in Richmond, Virginia. Rev. Franklin Harvey, Sr. accepted Christ at an early age. He was a minister at St. John Baptist Church, where he also served as an Usher, Chairman of the Deacon Board, Sunday School Teacher and Vacation Bible School Teacher. Rev. Franklin Harvey was united in holy matrimony with Christine Cosby on February 28, 1959. Their union was blessed with 3 children: Franklin Jr., Steven and Katrina. Since he had been cutting hair since the age of 12, Rev. Franklin Harvey enrolled in Turpins Barbering School in 1960. Once he finished barbering school, he opened his first three chair barber shop on Second Street in Richmond, Virginia. Rev. Franklin Harvey was a business owner of Harvey’s Progressive Barbershop for over 50 years until he retired. In 1961, he opened an 8-chair barber shop at First and Broad Street. In 1971, he invented the Afro Master Comb. In 1975, he opened his second shop with 15 chairs at 22 East Broad Street. In 1986, he received patents for 48 more combs designs. His accomplishments were having an Influential Black owned barbershop in the business district of Broad Street, a winner of several business and barber awards that inspired many of his employees to become entrepreneurs. During the 1990’s, he accepted the call into ministry, full time. He enrolled in Richmond Seminary School of Theology and later he became a licensed, ordained Baptist Minister. He was a minister at Imperial Plaza’s Manor Care Retirement home until he turned it over to his son. Franklin leaves to cherish his precious memory his two sons, Franklin D. Harvey, Jr. (Karen) and Steven V. Harvey; daughter, Katrina H. Gray (Terrance); grandsons, Terrance Gray, Jr. and Darius Gray; granddaughter, Kira Harvey; sisters, Mary Bishop, Rachel Cosby, Jerldene Hill and Gladys Archer (Chris); brothers, Winston Harvey (Doris), Thomas Harvey (Thelma) and Milton Harvey (Pauline); sister-in-law, Shirley Wilkins; and a host of nieces, nephews, cousins, other relatives and friends. His legacy will forever be a part of all our lives.

The family of Rev. Franklin Deheart Harvey Sr. created this Life Tributes page to make it easy to share your memories.

Send flowers to the Harvey family.