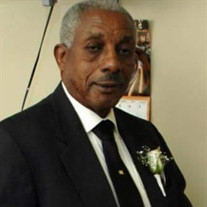 Franklin (Frank) Goodson, Sr., affectionately known as Hambone, entered this world on February 26, 1933 and went home to be with his Heavenly Father on November 29, 2021. Frank was born in Darlington, South Carolina and was the second youngest of twelve children born to Les and Lillie Goodson. He was raised with eight sisters: Flora, Sadie, Jessie, Ethel, Ruth, Essie Mae, Lillie, and Wilma; and three brothers: Les, Jr., Milton, and Clarence. Frank moved to Baltimore, Maryland in 1952. There he met Shirley Franks. They would be wed on October 27, 1956 and remained so until he went home to be with his God. They raised their family and were active and involved in the lives of their children, grandchildren, and great grandchildren. In about 1957 Frank went to work for the AAI Corporation. He would remain in their employment until he retired in 1992. Frank enjoyed his life. He enjoyed working on and fixing things. A family joke was that he could fix anything with a screwdriver and duct tape. He also enjoyed fishing, leaving out early in the morning and coming back with a cooler full of fish. He also loved to eat. He really enjoyed his food! But perhaps his greatest joy was being with his family. He was present at every event and was his family’s biggest supporter. Frank was the one who they could always count on when they were in need. He loved being there for his loved ones and would do anything that was asked. He was generous with both his time and his resources whenever there was a need. He was a humble man; who helped and encouraged without a seeking and accolades for himself. His life is exemplified in his favorite song, “May The Work I’ve Done Speak for Me”. Frank was preceded in death by his parents; his eleven brothers and sisters; his two daughters, Shirley Ann Player- Eldridge and Earlma Patricia Granger and his son Wayne Anthony Goodson. He leaves to cherish his memory his wife, Shirley; three daughters Cynthia (Tyrone, Sr.) Blackwell; Sharon (David) Tomlin and Angela (Mark) Cooley; one son: Franklin (Linda) Goodson, Jr,: four grandsons; seven granddaughters; twenty-two great grandchildren; one great great grandson; and a host of nieces and nephews and other relatives and friends.

Franklin (Frank) Goodson, Sr., affectionately known as Hambone, entered this world on February 26, 1933 and went home to be with his Heavenly Father on November 29, 2021. Frank was born in Darlington, South Carolina and was the second youngest... View Obituary & Service Information

The family of Franklin Goodson Sr created this Life Tributes page to make it easy to share your memories.

Send flowers to the Goodson family.