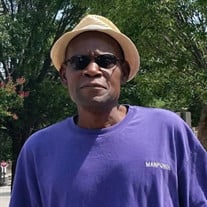 FRANKLIN EPPS, JR., better known to many as "Teeny Bubba", was born on February 24, 1963, to the late Franklin and Evelyn Novella Epps. Frank is the fourth of five children and was preceded in death by his brother, Rodney "BB" Epps. Frank accepted Christ at an early age and joined Beulah Baptist Church, Chesterfield, VA. He later joined Fifth Baptist Church, Richmond. Frank attended Graves Middle School and later John Marshall High School where he played in the band. His instrument of choice was the coronet. He would drive Mama crazy, but playing his instrument made him extremely happy. Frank's favorite class was Home Economics. He made his first suit which he wore with pride every chance he got. Frank's career was in construction. He loved working with his hands and creating things - we called him Mr. Fix-It or Not. Anything you wanted done Frank would do it even if it wasn't right. Frank loved children and the highlight of his day was helping them with their schoolwork - a task he looked forward to every day, especially his cousin, LaWanda. He knew math very well and had lots of patience. Frank also loved to draw and crack jokes. He loved to make people laugh and when the three of them (Tria/Frank/Rodney) got together it was Comedy Central free of charge, and all were welcomed. Frank enjoyed repeatedly reading Hardy Boys and Nancy Drew mystery novels. In his early years, his pastime was spent spinning records - better known as DJ Epps with his crew. Frank loved his family especially his nephew, Tuan. He leaves to cherish his memories his three loving and devoted sisters, Gwendolyn, Tria, and Lanita (Franette); brother-in-law, Roger "Toney" Thompson; adored nephew, Tuan Thompson (Wan); along with many aunts, uncles, cousins, and many friends; and devoted cousin, Wanda D Miller, who assisted with his care.

FRANKLIN EPPS, JR., better known to many as "Teeny Bubba", was born on February 24, 1963, to the late Franklin and Evelyn Novella Epps. Frank is the fourth of five children and was preceded in death by his brother, Rodney "BB" Epps. Frank... View Obituary & Service Information

The family of Franklin Epps, Jr. created this Life Tributes page to make it easy to share your memories.

FRANKLIN EPPS, JR., better known to many as &quot;Teeny Bubba&quot;, was...

Send flowers to the Epps, family.