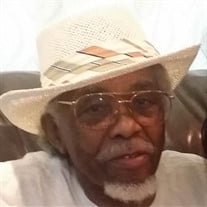 FRANK STANCIL JR., son of the late Frank Stancil Sr. and Willie Ann Stancil, was born June 27, 1927 in Greenville, North Carolina. On April 10, 2021, our beloved Frank went home to be with his Lord and Savior Jesus Christ. Frank (better known as) "Chuckie"was educated in the Greenville Public School System before relocating to Baltimore City with his mother and brother William Stancil. In 1950, he enlisted in the Ready Reserves and in 1952 he transferred to the Army Reserves. During that time her served in the Korean War. He was honorably discharged in 1957. Frank worked several jobs to take care of his family including Amtrak, where he retired from in 1989. Frank was always good with his hands and did nod not let retirement slow him down. He was a quiet, observant person who was always ready to engage in conversation related to house projects, and especially automobiles. One of his favorite lines when greeting a young man was "Hey Cool". Spending time with his family was one of Frank's favorite past times and always enjoyed telling stories from what he called "the good old days". In 1961, Frank married the love of his life Georgette Johnson and from that union five children were born: Theresa, Tyrone, Ramsey, Agunda and Ralphael. Brother Frank went on to join the Church of the New Covenant where his beloved wife Georgette was serving as an usher. He had been promising the brothers that he would eventually become part of the brotherhood and ultimately, lived up to his word. Frank leaves to cherish his memory and to continue his legacy: daughters, Francine, Theresa and Tonya; sons Alonzo (Mary), Ramsey (Cynthia), Agunda (Roslyn) and Ralphael; grandchildren, Adrian, Kenethia (Jerry), Renard, Jerome, Jermaine (Raquel), Tyron, Montego, Jeannine, Dallante, Ramsey Jr., Sean, Edward, Preston-Andrew, Simone and Alyssa; 21 great-grandchildren; sisters-in-law, Geraldine, Carla Maria and Marla; brothers-in-law, Bradley and Ronald; a special daughter-in-love, Angela Davis and a host of nieces, nephews, cousins, family members, church family and friends. He was preceded in death by his wife, Georgette Stancil; son, Tyrone Stancil; granddaughter, Rolanda McCue; grandson, Terry Stancil; great-grandson, Sincere Hunt; brother, William Stancil; sisters-in-law, Betty Coleman, Evelyn Johnson and Ruth Stancil.

The family of Frank Stancil Jr. created this Life Tributes page to make it easy to share your memories.

Send flowers to the Stancil family.