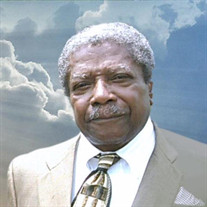 Legacy of Life Today we honor the life of a wonderful husband, father, grandfather, brother, uncle, cousin and friend for a long life well-lived. Frank William “Bro” Hunter, Jr. was born August 30, 1932, in Highpoint, North Carolina to the late Frank William Hunter, Sr., and Zefferie Crawford Hunter. He was preceded in death by his lovely sister Jackie Hunter Motley, brothers Bernard Hunter and Robert Lee Hunter (devoted). Frank received his formal education at William Penn High School in High Point, North Carolina. He furthered his education at Virginia Union University in Richmond, Virginia, where he received a football scholarship to attend. At an early age, he accepted Christ as his Lord and Savior at First Baptist Church in High Point, North Carolina. He met his best friend Eglenna Fuqua and they were united in holy matrimony on August 31, 1962 in Richmond, Virginia. He was later drafted into the United States Army where he served his country proudly. For some time he was stationed in Europe. Upon his release, he received an honorable discharge. He was employed as an insurance agent and while there he learned the business completely and later went into business on his own, thus the Hunter’s Insurance Agency. He also operated Prestige Motors where he served clients with previously owned vehicles. Upon retirement, he worked at the United States Postal Service and was a long-term substitute teacher in the Henrico County Public School System. He was very proud of his High Point, North Carolina roots and maintained connections with classmates and friends through the Pointer’s Club and events. Frank was also an active member of Club 533, an avid VUU Booster member, past president and community advocate. To cherish and keep his memories are a devoted daughter, Deborah Hunter Brown; grandsons, USAF Airmen Guyvin Brown and Justin Brown; sister, Wanda Hunter Allen (Horace); brother, James W. Hunter, Sr. (Edwina); sister-in-law, Bertha Lindsey Hunter; brother-in-law, Donald Motley, Sr., a host of nephews, nieces, grand-nephews and nieces, great grand-nephews and nieces, cousins and caring friends.

The family of Frank William Hunter Jr. created this Life Tributes page to make it easy to share your memories.

Today we honor the life of a wonderful husband,
father,...

Send flowers to the Hunter family.