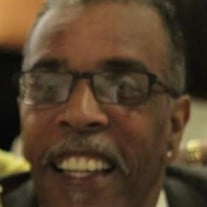 Those who walk uprightly enter into peace:they find rest as they lie in death. Isaiah 57:2 Frank Archiball Fowlkes was born on June 26, 1949 to Skezzy and Virginia Mae Fowlkes. He departed this life on Friday, May 14, 2021, after a long and courageous battle with his illness with his loving and devoted wife Diane by his side. Frank attend the School District of Crewe, Virginia. He later started a career at Havin Korber Solutions, where they specialized in manufacturing machines. He retired from the company after 35 years of dedicated service. Frank met the love of his life and his best friend, Diane in the year of 1988. They began their life together and in the year of 1992 they were united in marriage. Frank enjoyed spending time with his wife of 30 years and always hanging in his man cave (inside his garage). He loved watching the football game with the son he never had, Ronald Banks. They would always argue who was the best team, the Cowboys or the Eagles. Ronald was always there when Frank or his wife Diane would need him, putting a smile on Frank’s face, like no other. Frank loved going to the race track with his long time buddy. When he would go to New Jersey to visit his brother and sister-in-law, Dorothy and Jack, he would always have the best time ever. He referred to Dorothy as his “boo”. They had such a special relationship. She was always a supporter to him especially in the beginning of his illness, always helping out. Frank also had a special friend, Joe that would always visit him every Saturday. Frank enjoyed those visits and conversations they had. Frank was preceded in death by his parents Skezzy and Virginia Mae Fowlkes. He leaves to cherish his fond memories, devoted wife, Diane Fowlkes; 2 caring daughters, Chawan Jones and Kim Harrell; 5 grandchildren, Tim, Cam, Nya, Jordyn and Markeith; great-granddaughter, Londyn; brother, Gus; 5 sisters-in-law, Dorothy, Carolyn, Shirley, Sandy and Barbara; 5 brothers-in-law, Jack, John, Charlie, Alfonso, David and one preceded him in death, Theodore; a host of nieces, nephews, cousins, other relatives and dear friends.

Those who walk uprightly enter into peace:they find rest as they lie in death. Isaiah 57:2 Frank Archiball Fowlkes was born on June 26, 1949 to Skezzy and Virginia Mae Fowlkes. He departed this life on Friday, May 14, 2021, after a long and... View Obituary & Service Information

The family of Frank A. Fowlkes created this Life Tributes page to make it easy to share your memories.

Those who walk uprightly enter into peace:they find rest as they...

Send flowers to the Fowlkes family.