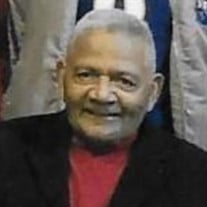 Floyd Lawson was born on July 4, 1936, to the late Floyd Sr. and Emma Wolford in Baltimore, Maryland, out of this union Floyd and 6 siblings. He was preceded in death by Edward Wolford, Robert Lawson, Maria Lawson, Delores Ashby and John Lawson. Floyd departed this life on October 22, 2021. Floyd, known by his family as "Speedy" received his education form Paul Laurence Dunbar High School in Baltimore, Maryland. He attended Morgan State University for 2 years, where he played basketball and was on the swim team. He loved sports and loved to watch every sport that he could. Floyd was united in marriage to the late Dorothy L. Tucker in 1968, they were happily married, and it was rare to see one without the other. After Floyd and Dorothy's union they became members of All Saints Church, where they both enjoyed singing and traveling with Dr. Bill Cummings. Floyd was known as "Coach" by many middle school students, particularly the children in All Saints Middle School where he taught basketball for many years. "Speedy" never missed his daughter Sabrina's games shouting his dissatisfaction with the referees' calls. Floyd retired after many years at Smithfield Foods, formerly Eskay Foods. He also worked as a security guard at Morgan State University and at the Maryland State Office Complex on Patterson Road in Baltimore. Floyd loved talking to people and enjoyed his security jobs which gave him the opportunity to be with people and talk to them on various topics. In 2000 Floyd and Dorothy joined New Covenant Tabernacle Church founded by Pastor Thomas and Rosalind Schwind. Floyd was committed to God and his church, ordained a Deacon at the church, Deacon Floyd loved his Pastor and friend for almost 40 years and often spoke about him and shared Pastor Tom's teachings in the Prison ministry and at Helping Up Mission Centers in Baltimore. Speedy loved family gatherings, he learned how to make his mother in law's cakes and started making cakes for his family and friends. Speedy loved to dance and at family gathering he would always find a dance partner to show off his moves. Floyd leaves to cherish his memories his children, Lichelle Lawson, Terryl Lawson, Miguel Lawson, Jenelle Lawson,Sabrina Owens; granddaughter, Dajah Owens and great-grand daughter, Loghan Owens; his brother, James Lawson; 2 sisters-in-laws, Lorraince Tucker and Diana Tucker; and a host of other relatives and friends.

Floyd Lawson was born on July 4, 1936, to the late Floyd Sr. and Emma Wolford in Baltimore, Maryland, out of this union Floyd and 6 siblings. He was preceded in death by Edward Wolford, Robert Lawson, Maria Lawson, Delores Ashby and John Lawson.... View Obituary & Service Information

The family of Floyd Lawson Jr. created this Life Tributes page to make it easy to share your memories.

Send flowers to the Lawson family.