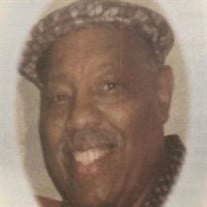 FLOYD LOUIS HOPPS, SR. was born March 25, 1927 in Baltimore, Maryland and departed this life 11, 2021 after a brief illness. Floyd was the son of the late Dorothy Hopps and the Albert Drew. Floyd was the youngest of the five. Floyd was educated... View Obituary & Service Information

The family of Floyd L Hopps created this Life Tributes page to make it easy to share your memories.

Send flowers to the Hopps family.