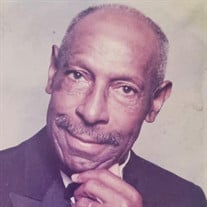 FLOYD COLLINS BALLARD, SR. was born Tuesday, April 9, 1929, in Baltimore, Maryland. He was the 9th of 11 children born to Charles Collins Ballard and Lettie Jane Richardson Ballard. His siblings were: Charlestau, Sanford, Ruth, Rebecca, Paul, Leona, Virginia, Scotia, Minnie, and Sylvia. Education: His early public education began at Phyllis Wheatley Elementary School #110 - Fremont Avenue and Waesche Street. He enjoyed going to school and often shared memories with his family. Floyd would stop at a corner store and buy five cent chocolate candy bars that he hid in his desk. During the day, he would break pieces off and eat them, until he was caught by a crafty teacher who kept him in after school. She warned him to never bring in a candy bar again unless he brought her one too. After a period of time, he was kept after school again. This time, the teacher told him to stop bringing the candy because she was gaining weight. It is noted that Floyd was born in 1929, the year The Great Depression began. Some economists will say it lasted from 1929-1933. In certain communities, it lasted from 1929-1939, or more. Floyd stopped out of school to help support his family. Once he was married with children, he went to night school to earn a GED. He stopped out again because other students insisted on popping gum so loudly making it difficult to concentrate. Floyd continued to learn through life-long experiences. Employment: In the early 1940’s, Floyd had odd jobs, ran errands, delivered coal/ice and traveled with arabbers to deliver fresh produce across Baltimore City. At 19, he began working at the Atlantic & Pacific Tea Company (A&P) on Franklintown Road. He was a produce selector, working there for 43 years. Marriage: In 1946, Floyd met Margaret Laurene Keene, who lived at 256 N. Arlington Avenue. Her family had migrated from Cambridge, Maryland on the Eastern Shore. He used to deliver ice in their community. One wonders how they could date for two years since she was too shy to even open the door when Floyd knocked to see if they needed ice. He proposed June 1, 1949. They were married on June 21, 1949. It’s a Family Affair: Floyd, Sr. and Margaret raised ten children: Margaret, Linda, Ruth, Floyd, Jr., Michelle, Michael, Sr., Lisa, David, Sr., Keith, and Kim. That’s correct, twelve people in a row house with one bathroom at 327 N. Schroeder Street. Imagine that! Skills: It didn’t matter whether Floyd was on Schroeder Street or at The Wesley, he was a “fixer.” This included fixing broken toys, appliances and hearts. If you went to him with a problem, by the time he finished sharing his “witticisms” or funny stories, you had either solved the problem, forgotten what it was or realized it was never a problem at all. He was always an active supporter of education. Floyd was physically fit, strong and active. He participated in many March of Dimes Walk-a-thons – walking and jogging for 25 miles, was a “pool shark” and gave tennis lessons at Easterwood Park on Bentalou Street to Margaret, his wife. He spent many hours with his family and community children engaged in sports: football, baseball, table tennis, badminton, jump rope and three-legged races at family reunions. Floyd rented horses from stables to take children on rides. He loved his family, life, literacy, and music - especially jazz. Floyd was a great photographer, had a soothing singing voice, and he could dance! Proud Legacy: Floyd is preceded in death by his wife - Margaret, two sons – Michael, Sr. and David, Sr., one daughter - Ruth and his ten siblings. He leaves to cherish his memory: five daughters - Margaret, Linda, Michelle, Lisa (Gerald) and Kim; two sons – Floyd, Jr. and Keith; 19 grandchildren - Bomani, Takasa, Lynnette, Cheryl, Juanika (Monica), Tynisha (Larry), Colleen (Antoine), Charles, Jr., El (Ashley), Michael, Jr., Breyona, Marquita (Christopher, Sr.), Portia (Darrius), Brittany (Dominique), David, Jr., Keyona, Shaniqua, Caleah, Monique (Lloyd, Jr.); 28 great-grandchildren and 2 great-great-grandchildren; two sisters-in-law - Martha Squirewell and Ruth Faulcon; and a host of nieces, nephews, other extended family members and friends. O B I T U A R Y

The family of Floyd Collins Ballard, Sr. created this Life Tributes page to make it easy to share your memories.

Send flowers to the Ballard, family.