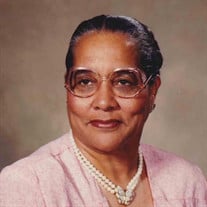 Remembering Florence Florence Elizabeth Taylor, lovingly known as “Toad” or “ Tuna Fish”, peacefully went home to be with the Lord on August 14, 2021 at her residence in Mechanicsville, Virginia. The youngest of 18 siblings, she was born in Charles City County on September 20, 1929, to the late Ananias and Charlesanna Adkins. She received her education in the Charles City County and Richmond Public School systems, graduating from Armstrong High School. Upon graduation, she was employed by “M&B” Headwear (Richmond) and served as the head bookkeeper for over 30 years. With a limited education, she excelled as bookkeeper and was known for her aptitude with numbers that extended beyond the job and into the services she provided to organizations later in her life. Giving her life to Christ at an early age, she became a member of St. John Baptist Church (Charles City) and remained affiliated until her death. After marriage, she continued practicing her faith as an active member of First Union Baptist Church in Mechanicsville, where she served as the financial clerk and Sunday School teacher. In 1984, she became an active member of the Richmond Christian Center, serving as the financial secretary and an active member of the Nursing Home ministry. She retired from RCC after over 30 years of active participation. Upon her retirement, she re-affiliated with First Union Baptist Church in Mechanicsville. Florence loved to spend time with family and friends. She was a proud member of the “Jolly Bees”. They were a group of loving friends who traveled and spent quality time together such as going to the theatre to see the new Tyler Perry movie. She was known for calling her nieces and nephews to check on them and loved when family came by to see her. She would cook her famous rolls and homemade ice cream. She was also a proud great-grandmother, affectionately called “GG”. She loved spending time with them and had a special relationship with each one. In addition to her parents, she was preceded in death by her husband, Clarence J. Taylor, Sr. and her 17 siblings. Florence leaves to cherish her memories, three children Bernard L. Robinson (Pamela), Jennifer L. Allen (Terrence), and Clarence J. Taylor, Jr.; five grandchildren, Hoova Taylor, Malissa Whitby (Kirk), Joseph Clarke, Marlo Robinson, and Amethyst Tinsley-Puhr (Ryan); three great-grandchildren, Kaydin, Sydney, and Journey Whitby; many nieces, nephews, other relatives and friends.

Remembering Florence Florence Elizabeth Taylor, lovingly known as &#8220;Toad&#8221; or &#8220; Tuna Fish&#8221;, peacefully went home to be with the Lord on August 14, 2021 at her residence in Mechanicsville, Virginia. The youngest of 18 siblings,... View Obituary & Service Information

The family of Florence Elizabeth Taylor created this Life Tributes page to make it easy to share your memories.