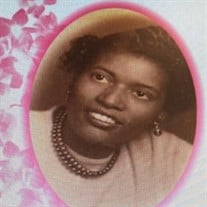 FLORENCE LEE FALLEN FERGUSON was born April 28, 1929, to Minnie Denny and Waiverly Fallen in Danville, Virginia. She was educated in the Danville, Virginia Public Schools. In March 1953 she married the late John Daniel Ferguson. From this union six children were born. In 1957, the family relocated to Baltimore, Maryland. Florence was a faithful member of The Ark Church, formerly Little Ark Missionary Baptist Church, until her health prevented her from attending. She served her church as a missionary; lovingly visiting the sick and working in the clothes closet and food pantry. Florence also served in the Christian Education Department where she taught Sunday School, New Members Class, and the Church Covenant. Florence demonstrated her love of studying the word of God by graduating from the Baltimore School of The Bible in 1985. Florence was a community activist who was instrumental in organizing neighborhood block parties and the building of a playground to ensure that the community’s youth had a safe place to play. Florence was dedicated to serving her Lord and Savior, Jesus Christ. She was a committed prayer warrior who prayed for her family, friends, and church twice daily. She was obedient to Ephesians 6:14; raising her children and grandchildren in the nurture and admonition of the Lord. Florence was known for her quirky sense of humor, acts of love, and her kind demeanor. Along her life’s journey, she met many who would lovingly call her mom. Florence was preceded in death by her husband, John; her son, Anthony; her son-in-law, Jamie Phillips; and her grandsons, Corey Butler and Jamie Phillips II; and her seven siblings. She leaves to cherish her memory: her sister-in-law, Ella Fallen; three daughters, Wilda Mosley, Garnitha Ferguson, Valerie Phillips; three sons, Wallace Ferguson, Curtis Ferguson, and Bernard Crowell; son-in-law, Elliott Mosley; two daughters-in-law, Jacqueline and Senora Ferguson; eight grandchildren, Jason Jones, Seven ”Jamell” Gaines, Candace Ferguson, Briana Ferguson,Lauren Ferguson, Erin Ferguson, Daniel Ferguson, and Anthony Ferguson II; six great-grandchildren, two great-great-grandchildren, and a host of nieces, nephews, cousins, and friends. I will see you in the rapture! Love, Floren

FLORENCE LEE FALLEN FERGUSON was born April 28, 1929, to Minnie Denny and Waiverly Fallen in Danville, Virginia. She was educated in the Danville, Virginia Public Schools. In March 1953 she married the late John Daniel Ferguson. From this union six... View Obituary & Service Information

The family of Florence Lee Ferguson created this Life Tributes page to make it easy to share your memories.

Send flowers to the Ferguson family.