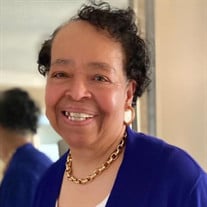 Evelyn Player, affectionately known as "Dump" by her family and friends, was the daughter of the late Susie Mae Wright and Thomas Sanders. Eveyln was born April 25, 1952 in Martin County, North Carolina. However, Evelyn's family relocated to Baltimore, Maryland when she was five-years-old. Evelyn's life thrived in Baltimore, Maryland! While there, she attended graduated from the historic Paul Laurence Dunbar High School in 1970. Of course, Evelyn was involved in sport in high school - she was a proud member of the Girls Basketball team, and in her unique way, she would boast about her skills on the basketball court. (Can't you hear her trash talking) Not only did Evelyn experience academic success in Baltimore, she also met and married the love of her life, Thomas Lee Player. They joined together in holy matrimony on February 20, 1971, and from this union, they gave birth to their "baby girl" Alethea. After graduating, she worked as a Telephone Operator at Chesapeake and Potomac Telephone Company (C & P Telephone) for five years. In 1975, Evelyn progressed in her career and began working at Waverly Press as a Bindery Trainer. She loved to learn new skills and held several positions within the company. She retired from Lippincott, Williams & Wilkins (formerly, Waverly, Inc.) after 28 years of faithful service. After retirement, she sought out different ways to stimulate her mind and take on new challenges. As such, Evelyn enrolled in All State Career to study medical billing and coding. In 2011, she graduated as valedictorian of her class! Evelyn earned her certification as National Certified Insurance & Coding Specialist and was employed as a Coding Specialist at Chase Brexton Health Care. Evelyn eventually resigned from the company to take care of her ill mother. Evelyn was raised in Southern Baptist Church where she accepted Christ as her personal Savior. Evelyn loved her church family! He love for her church family was evidenced through her service and the relationships she built. She enjoyed traveling with her church family and attending plays at Sight & Sound in Lancaster, PA. She also enjoyed studying God's word and was a proud graduate of Southern Baptist Church's discipleship class. her favorite scripture was Philippians 3:14, "I pressed toward the mark for the prize of the high calling of God in Christ Jesus." Evelyn truly epitomized the meaning of servanthood and service! She served on the Early Morning Choir, Media Ministry, Hospitality Committee, and Pastor's Aide, to name a few. She also served and worked at the church (Southern Baptist Church) as a sexton. Similarly, Evelyn faithfully volunteered with Angels Helping Angels (AHA) to help serve and distribute food to those in need. Serving the community on the 1st and 3rd Saturday's and during the holiday season truly brought a smile to her face. She also volunteered with Thomasine's Legacy for over 10 years. Evelyn served the Lord with gladness and was a bold witness of His love and grace. She was a faithful, relentless, and dedicated servant! Evelyn always called to check on those dear to her heart and was willing to do whatever she could to help others. If you knew Evelyn, she had a kind smile and heart of gold, but she was not a pushover. She was certainly a force! The hard exterior that you saw was nothing like the sweet lady you grew to love! She was very protective of those in her circle. Her daughter and grandson meant the world to her. Kenneth was the love of her life and Alethea was her BFF. The most precious moments were spent with them. Their home was filled with love, laughter, and good times. If you could group the characteristics of compassionate, dedicated, strong, straightforward, loving, and fun together, it would simply be defined as Evelyn. She loved people and in turn she was loved. The Lord called our beloved Evelyn to her eternal home on Tuesday, November 16, 2021. She leaves to cherish her fond memories: her daughter, Alethea L. Finch; grandson, ,Kenneth T. Melton, Jr.; two brothers; Edward Clarke and Lee Curtis Clarke, Sr. (Angela); James Clarke (preceded her in death); four nieces Monicka Boyd, Nikeshia Clarke, Alicia Clarke, and Kim Fogg; one nephew, Lee Curtis Clarke, Jr. (Jennifer); four great-nieces, and eight great-nephews; and adopted parents: Lucille Phillips, and Mr. and Mrs. Sylvester and Nettie Biggs; adopted son; Bernard Tyler-Laguer (Andie); sister/best friend; Reverend Molene Martin (Tommy); dear friends: Arnold Anthony, Cherita James, Karen Hazelton, Mary Nelson, Joyce Wilkins, Lucy Simon, Toni Mallory, and Vanessia Bizzelle; and a host of other relatives and friends.

Evelyn Player, affectionately known as "Dump" by her family and friends, was the daughter of the late Susie Mae Wright and Thomas Sanders. Eveyln was born April 25, 1952 in Martin County, North Carolina. However, Evelyn's family relocated... View Obituary & Service Information

The family of Evelyn Player created this Life Tributes page to make it easy to share your memories.

Evelyn Player, affectionately known as &quot;Dump&quot; by her family and...

Send flowers to the Player family.