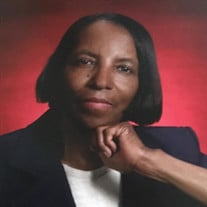 Evelyn Davis was born January 15, 1944 in Hartsville, South Carolina. She was one of seven children, and the oldest of twins born to the late Leroy and Mattie Jr., Howard (Ruby), James (Mary Elle), and Lucy. Being Raised in a Christian home, at an early age she was baptized and united with the New Hopewell Baptist Church in the Byrdtown Community of Darlington County. It was there that a life-long journey as a follower of Christ began. Her early education was obtained in the schools of Hartsville, SC where she graduated salutatorian of her class from Butler High School in 1961. After completing her secondary education, she entered Morgan State University in Baltimore MD from which she earned a Bachelor's Degree. Evelyn would make Baltimore her permanent home where she developed a passion for civic and community engagement. She was a long-time member of the NAACP, and was actively involved with the city's Community Relations Commission from 1975-1999. She also served a 10- year tenure with Baltimore's Foster Care Review Board. Additionally, she was a member of the Hanlon Community Association, and volunteered at the Hilton Elementary School in her neighborhood. True to her commitment to live to Christian life, she regularly attended mid-week worship services at the New Psalmist Baptist Church where she became a member in the early- 1980's under the pastorate of the eminent Bishop Walter S. Thomas. With her outgoing and infectious personality, Evelyn became well- known in the popular 100-year-old church with 7,000 members. For over 35 years, she was recognized as president of the church with 7,000 members. For over 35 years, she was recognized as president of the church's Comfort Choir. She remained a faithful member, even in illness, especially to the Wednesday mid-week service where she began. Evelyn was a regular personality on Radio State WITH 1230 as part of her work with Baltimore's Weekly Community Outreach Program. Her show was dubbed "Captive Audience". After her retirement, she was in frequent attendance at Baltimore Ravens football games and major concerts as part of her post- retirement work with S.A.F.E. security agency. Evelyn Davis peacefully and triumphantly laid down her across in exchange for a crown of eternal life on Wednesday, May 12, 2021 at 5:15 p.m. in the comfort of her home. Her legacy of commitment to Christ, family, and community will be cherished by her daughter, Deridra Davis Burnden, Philadelphia, PA; grandsons, William Ernest Davis Burden, Myles Davis Burden and Robert Gregory Davis Burden, all of Philadelphia, PA; brothers, Edward (Tommie) Davis, Hartville, SC and elder Willie (JoAnn) Davis, Jacksonville, FL; uncle, James (Dorothy) Coleman, especially close cousins, Joyce Alexander, Paula Tyler, and Gregory Tyler, all of Baltimore, MD; and a host of nieces, nephews, cousins and other relatives and friends.

Evelyn Davis was born January 15, 1944 in Hartsville, South Carolina. She was one of seven children, and the oldest of twins born to the late Leroy and Mattie Jr., Howard (Ruby), James (Mary Elle), and Lucy. Being Raised in a Christian home,... View Obituary & Service Information

The family of Evelyn Davis created this Life Tributes page to make it easy to share your memories.