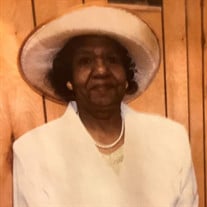 On Sunday, November 21, 2021 Evelyn Bright was called home to be with the Lord after a short illness. Evelyn A. Bright (NEE DAVIS) was born on July 2, 1936 the only child of the late Nelo and Elizabeth Davis in Washington DC. Evelyn grew up in Washington DC and was educated in the DC public school system. For a short time Evelyn attended the District of Columbia Teachers College. As a young child Evelyn was baptized at the Metropolitan Baptist Church in Washington DC. In the 1950's Evelyn met the love of her life, the late John H. Brought Sr, The two married on June4, 1955 in Columbia, South Carolina. From that union they raised six children, Vanetta, Elizabeth, John Jr., Donna, Michael, and Michelle. Due to her husband's military status, Evelyn and her children resided out of the country on several different occasions throughout their marriage as well as in the State of Texas and the District of Columbia. Four of Evelyn's children were even born in different parts of Germany. The family moved to Baltimore in 1968 and settled in the well-known home located on Penhurst Avenue where Evelyn resided until her passing. Evelyn quickly became the neighborhood mother and babysitter for many families. Evelyn held several jobs throughout her life. Her longest employment was with the Social Security Administration (SSA) where she worked for 20 years in the Dickerson Building located in Woodlawn, Maryland. She retired from SSA in 1991. In 1975 Evelyn, John, and their children joined First Christian Community Baptist Church under the leadership of the late Reverend Doctor Ernest Humphrey. Evelyn Bright was faithful member, attending each Sunday service until the pandemic caused facilities to shut down in March 2020. Throughout the years, Evelyn served as a member of the Senior Usher Board, The Gospel Choir, Unified Voices, the Kitchen Committee and The Pastors Aid where she served as president for many years. Evelyn was also a delegate for the National Baptist Convention for a number of years. Evelyn was a caring,nurturing, and lovable mother, grandmother, great-grandmother and friend. She loved church and praising the Lord. She was known to many of her church family as Mother right, but everyone called Evelyn "MotherDear" (which was the nickname given to her by her oldest grandchild, Nickia). She leaves to cherish her memory: her children, John H. Bright Jr., Donna A. Bright, Michael W. Bright (Lottie Porch-Bright) and Michelle A. Bright; nine grandchildren, Nickia Bright (Joseph Yewitt), Brain Black Jr., Erica Moore (Bennie Moore), Letitia Black, Antoine Bright, Charles Bright, Michael Bright Jr., Cierra Bright(Christoper Davis) and Lakia West; six great-grandchildren, Aniya Bright, Cyniya Bright, Angel Bright, Jace Hunter, Bennie Moore Jr., and Khloe Colbert; aunt Irma Morris; her friend for many years, Curlene Coleman; two goddaughters, Veronica Coleman and Nichelle White; and a host of loving nieces, nephews and friends. Evelyn Bright was preceded in death by her husband John H. Bright Sr., two daughters Elizabeth Black and Venetta Bright, and her grandson Damon Bright.

On Sunday, November 21, 2021 Evelyn Bright was called home to be with the Lord after a short illness. Evelyn A. Bright (NEE DAVIS) was born on July 2, 1936 the only child of the late Nelo and Elizabeth Davis in Washington DC. Evelyn grew... View Obituary & Service Information

The family of Evelyn A Bright created this Life Tributes page to make it easy to share your memories.

Send flowers to the Bright family.