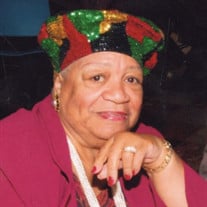 In lieu of flowers, donations can be made to the Eva & Benjamin Brown Scholarship Fund, C/O Mother Mary Lange Catholic School, 200 N. Martin Luther King Blvd., Baltimore, MD. 21201 or through their website, MMLCS.org If anyone should ever write her life story… For whatever reason the script might read, To God be the Glory…For Jesus is the best thing that ever happened to her! On Sunday, April 25, 2021, our dearly beloved EVA BEATRICE TAYLOR BROWN passed from this life to her heavenly home. We rest in the blessed assurance that she has gone home to our precious Lord. Eva was born in Baltimore, Maryland on November 24, 1928 to the late Emerson Norris, Sr. and Beatrice Taylor. She was educated in the Baltimore City Public School System. She strongly believed in the power of higher learning and encouraged her children to pursue and complete their education. On March 25, 1947, she married the love of her life, the late Benjamin Franklin Brown. They enjoyed 44 years of marital bliss until his passing on December 29, 1991. Their beautiful marriage was blessed with eight children and was an inspiration to her family and friends. Eva was briefly employed as a secretary at Fort Meade, but at the insistence of her spouse decided to forego employment and remain in the home to ensure that her children would always have the benefit of her loving and nurturing presence at 1135 Poplar Grove Street. After her children were older, she returned to working part-time. A known fashionista, she was very proud of her work for designer Pauline Brooks as a full-figured model. She also enjoyed serving as a hostess at the Hutzler’s Department Store Tearoom. We will always cherish the memory of her recounting memorable events of her life such as the night she attended a concert featuring Louis Armstrong at the Royal Theatre with Ben, and the legendary Satchmo invited her to come to the stage saying “Lady with the red hat, won’t you come down and dance with me?” or her rendition of “I Got A Man Way Cross Town”. Eva was a woman of many talents, especially for making everyone she met feel welcomed. When it came to her children, they were all raised with the knowledge that whatever the challenges or opportunities of life, they were not only worthy but deserving. She was very proud of her children and made each one feel special. She is survived by her eight children, Bernadette Murphy (Daniel), Vanessea Straughn, Michelly Merrick (Theodoredeceased),Hakim Raheem (JoAnn), Arvel Brown, Sr (Bernadette- deceased), Ava Brown, Darnell Fulton (Junius) and Carmella Scott (Rickey). In addition to raising a large family, Eva enjoyed a vibrant and committed life in the Catholic Church. She was a devoted member of St. Edward Catholic Church for over 60 years, where she raised all of her children and served in several ministries. She led the Blessed Virgin Mary Sodality as Prefect for many years. She also served as an offertory counter and as a member of the “Servants of the Crucified Savior” and the Knights of Peter Claver Ladies Auxiliary. Saint Edward’ had a special place in her heart. Eva’s greatest joy was spending time with her family and friends. The home was the focal point of many joyful, boisterous parties and gatherings. In addition to her eight children. Eva leaves to cherish her memory, nine grandchildren, Dr. Brett Dawson, Dr. Lynn Michalopoulos, Mo Straughn; Cristina Matthews, Loreen Harris, Arvel Brown, Jr., Evelyn Johnson, Pastor Sean Brown Sr. and Teresa Edloe, nineteen great-grandchildren, and five great-great-grandchildren. She is also survived by her siblings, Randolph Norris (Elsie); Douglas Norris (Margaret); Violet Davenport; Gladys Cottrell; Helen Ball (Donald); Stanley Norris (Phyllis) and Patricia Walton and brother-in-law Johnny Brown (Velvet). She also leaves to cherish her memory a host of nieces, nephews, cousins, friends and her unofficial adopted son, William Hall and many other adopted children who held a special place in her heart, who are too many to name. Eva’s gift for making people feel special was matched and returned to her by the very special relationship she enjoyed with her primary care physician, Dr. Samuel Durso. The family will always remember the friendly banter and affection that existed between the two that went beyond a doctor-patient relationship but was crucial to our Mother’s well-being. Eva’s infectious smile and joy for life was shared with everyone she encountered. She treated everyone with such a loving spirit as she was truly possessed with the spirit of Christ.

In lieu of flowers, donations can be made to the Eva & Benjamin Brown Scholarship Fund, C/O Mother Mary Lange Catholic School, 200 N. Martin Luther King Blvd., Baltimore, MD. 21201 or through their website, MMLCS.org If anyone should ever... View Obituary & Service Information

The family of Eva Beatrice Brown created this Life Tributes page to make it easy to share your memories.

In lieu of flowers, donations can be made to the Eva &amp; Benjamin...