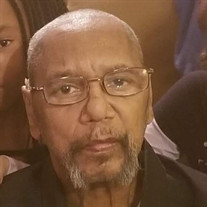 Eugene Sidney Lyles affectionately known as "Skip" was born on May 22, 1940 to the late Eugene and Ruth Lyles. Sidney departed this life on May 13, 2021. Sidney was born, raised, and educated in Baltimore, Maryland. At the age of seventeen... View Obituary & Service Information

The family of Eugene Sidney Lyles Jr. created this Life Tributes page to make it easy to share your memories.

Eugene Sidney Lyles affectionately known as &quot;Skip&quot; was born on...

Send flowers to the Lyles family.