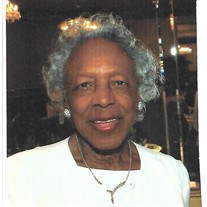 Essie Utley Sutton, daughter of the late Cora and Nathan Utley was born in Varina, North Carolina on February 14th, 1924, she entered her eternal rest on September 26, 2021. She was preceded in death by two sisters, Vashtie Winston and Leatha Johnson as well as four brothers, Otis, Reuben, Marvin and Nathaniel Utley. She attended public school and graduated from Fuquay Springs High School and was Salutatorian of her class. She attended Shaw University before coming to Baltimore, Maryland to work for the Federal Government. Essie graduated from Cortez Peters Business School at the top of her class. Later, she went to Douglass Evening School to become a dressmaker. While working at Social Security, she met and married the late Wendell Nathaniel Sutton. They were blessed with two sons, Ronald and Wendell. When her children became school age, Essie became a volunteer worker for several organizations. Essie worked at Crownsville Hospital Center for over 40 years, where she received many awards from the hospital. She also received awards from the County Executive and the Governor. She worked on many political campaigns, local and national. She joined Women Behind the Community as a Charter Member in 1968 and continued to be a member until her death. She became an active member of the Association for the Study of African American Life and History, and she worked on many committees and served as the secretary for many years. Through her dedication and years of service, she became a life member. She joined Holy Trinity Episcopal Church in 1966, where she was active in the Acolyte Mother’s Guild, the Dorcas Guild, and the Altar Guild. She worked on other committees such as Family Day, Anniversary Sundays and the Annual Bull Roast. Essie was active in the community. She worked in the school library, with the PTA at Grove Park Elementary School and a member of the West Arlington Improvement Association. She also went door to door for many organizations to do charity work. Essie was a life member of the NAACP, she was honored by the Delta Sigma Sorority for community services, the Leah’s Book Club and the Church of the Holy Trinity. Left to cherish and to continue her legacy are her two sons; Ronald(Earnestine) and Wendell(Esperance); six grandchildren, Ronald Jr., Ebonie, Sekou, Jason, Alexandra, Kelly; eleven great grandchildren; one great great grandchild and a host of relatives and friends.

Essie Utley Sutton, daughter of the late Cora and Nathan Utley was born in Varina, North Carolina on February 14th, 1924, she entered her eternal rest on September 26, 2021. She was preceded in death by two sisters, Vashtie Winston and Leatha... View Obituary & Service Information

The family of Essie U. Sutton created this Life Tributes page to make it easy to share your memories.

Send flowers to the Sutton family.