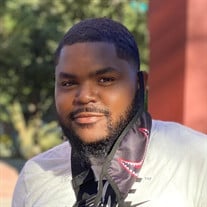 ERROL NOLAND DAVIS, JR., beloved son of Errol, Sr. and Constantina Davis, devoted father of Kayline Davis, and loving brother of Amber Davis, was born on January 31, 1995 and departed his earthly life suddenly on July 24, 2021. God doesn’t make mistakes and saw it was time for him to rest and He gave him peace and called him home to eternity. He received his education in the Baltimore County Public Schools and upon graduation in 2003 he went to work for Cloverland Dairy. When he left Cloverland he began working different jobs until he landed a position with FedEx as a Material Handler, which he loved as well as his co-workers. Errol loved sports, magic, drawing, music, and family gatherings, but most of all he loved his family and friends; they were everything to him. Errol (Lil Errol, Frog, Squirrel, Jr. & E), were just a few of the names he went by. Errol received Christ at an early age and was baptized and became a member of Maranatha Memorial Baptist Church, where he attended men’s fellowship and summer bible camp. His love for the Lord was real. He had a sweet, quiet spirit and to know him was to love him. He leaves to cherish his memory: his father, Errol, Sr.; mother, Constantina Davis; sister, Amber Davis; daughter, Kayline Nicole Sky Davis; his girlfriend, Kayla Prather; twelve aunts, eight uncles, two great-aunts and one great-uncle; three best friends, Kamau, Jerome & AJ; a host of cousins, family, and friends.

The family of Errol N Davis Jr. created this Life Tributes page to make it easy to share your memories.