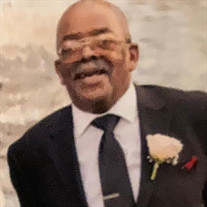 Ernest Calvin Tomlin, Sr. better known as "Tank" or "Sonny" in his younger years, was born on October 13, 1940 in Baltimore, Maryland to the late Robinson Taylor and Eva Louise Matthews. He transitioned from this life and was welcomed to his Heavenly Home on January 21, 2022. Tank grew up in the Baltimore City area known as "Sandtown" and received his education through the Baltimore City Public School System. He had an interesting work history, starting out at a young age as an "Arabber". He and his Aunt Jo Brown sold newspapers together. He then proceeded to work for the Penn Upholster Company. Later, he was the manager of the Elgin Lounge. Ultimately, he began working for the Banner Construction Company where he remained until he retired. On February 25, 1961, Tank married Christine Fletcher and from that union three children were born: Ernest Jr., Geneva, and Leslie. They provided him with the joy of his life, especially his grandchildren and great grandchildren, by whom he was lovingly known as "Pop-Pop". Tank was very sociable and loved by many. Although he would call you by the wrong name, no matter how many times you corrected him. He was a constant patron of the Northeast Market. He was jokingly known as the "Mayor" of that facility. He was known by many , even if he traveled out of state. He enjoyed playing the lottery and going to the Horseshoe Casino. He was an enthusiastic sports fan, especially football and the Baltimore Ravens. Tank was a dapper dresser and was known for wearing "apple" hats. He loved to travel and was very well versed in the identification of many spirits, especially Canadian Club (C.C.), which was his favorite. Tank leaves to mourn, a devoted wife 60 years, Christine; children, Ernest Jr. (Eugenia), Geneva (Gordon), and Leslie (Cedric); grandchildren, Domonique (Terrence Jr.), Jasmine (Randall), Jada, Maryum, Erika and Joshua; great-grandchildren, Mar'quan, and Terrence III; brother, Ronald Matthews (Mecia); sisters; Sheila Crudup (John), Soretta Williams, and Andrea Duran (Carlos). He was preceded in death by a brother, Leroy Griffing Sr. and sisters, Ella Spencer and Patricia Stevens; aunt, Delores "Jo Brown" Merritt (Tyrone); a special cousin, Jacqueline V. Coates; and a host of nieces, nephews, cousins, and friends.

Ernest Calvin Tomlin, Sr. better known as "Tank" or "Sonny" in his younger years, was born on October 13, 1940 in Baltimore, Maryland to the late Robinson Taylor and Eva Louise Matthews. He transitioned from this life and was welcomed to his... View Obituary & Service Information

The family of Ernest Tomlin Sr. created this Life Tributes page to make it easy to share your memories.

Send flowers to the Tomlin family.