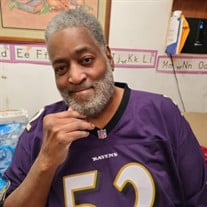 MR. ELROY ROOSEVELT CHRISTOPHER SR. was born on May 6, 1954, in Baltimore, Maryland, to the union of Roosevelt and Eldora Christopher. Elroy Christopher was the second oldest of six children. Elroy was raised in a loving household with his mother, father, sisters and brothers. Elroy was educated in the Baltimore City Public School System and graduated from Carver Vocational High School, where he majored in the Electronics trade. Elroy excelled in his academics so much so that he became a student teacher helping his fellow classmates as well as his instructors. He repaired radios and TVs for many neighbors. Not only did Elroy excel in academics, but he was also the Carver High School’s Basketball star, towering at six feet nine inches tall. He was scouted by athletic directors across the state and was led to attend Bowie State University in Bowie Maryland. Elroy was also recognized by scouts from the NBA (National Basketball Association) and was invited to try-out for the Philadelphia 76’ers. During Elroy’s college semester breaks, he returned to Carver High to teach Electronics. Elroy enjoyed helping people. After college, Elroy accepted employment at the Baltimore Gas & Electric Company where he continued working in electronics as an Electrical technician. Elroy was so passionate about electronics that he developed a transformer which was recognized and later patented by the Baltimore Gas & Electric Company– and is widely used today across the country. Later, Elroy started his own computer building and repair business Elroy’s met a stunningly beautiful lady ,her name was Cleo Doughty. Cleo became the love of Elroy’s life and they married on November 1, 1980. To this union, they were blessed with four children, They moved to Pitcher Street, where Elroy was instrumental in neighborhood activities. He hosted famous block parties with his “professional DJ” music. He was featured on WEBB radio doing music sets as “Pumping Big Roy”! In the early 1990, Elroy and Cleo moved their family from the familiar West Baltimore to East Baltimore. Living in East Baltimore, Elroy began building relationships with his new neighbors and the larger community, including Johns Hopkins University. Elroy became a devoted member of the Huber Memorial Church where he was deeply inspired by his pastor, Reverend P.M. Smith, to continue his work in the community. It was his pastor that taught him, “It’s all about relationships or it ain’t about nothing”. Elroy became the Director of the Covenant Community Association – which taught math, English, and grammar to the youth in an after-school program. In the summer months, Elroy ran a camp for the neighborhood youth. At any given time, you would find Elroy (known to most as Mr. Chris) tending to the community garden in the 900 block of Glover Street, a project Elroy began in 1996 and named it the “Garden of Eden” – a place where youth were growing more than just plants - they were growing young minds. Twenty years earlier, the garden was a junk yard that required 17 dump trucks to haul away the trash. In the mid-1990s, Elroy became the Co-Director of the Rose Street Community Center. He setup camp on the corner of Ashland Avenue and Rose Street. Elroy operated from a homemade tent and he and a comrade became the 24-hour neighborhood watchmen for 100 days– in an area that was over-run with drug traffic. As a result, the residents of the neighborhood had a more peaceful and safer life. In addition, Elroy expressed concerns for his aging neighbors and started a Light Rail Project, which provided all homes with a light and a rail for safety for seniors. Through the Maryland Food Bank, Elroy in his “red van” provided many community residents with laundry detergent, food, and other household needs. The National Press Club recognized and awarded Elroy for his community service. Elroy also received the Bank of America Neighborhood Excellence Initiative Award for his uncompromising efforts in East Baltimore. However, only God knows the countless lives who Elroy touched! For 40 years, Elroy and Cleo’s love affair continued, adding children and grandchildren. He is remembered for making sure family dinners were a time of togetherness. At the dinner table was where he would love to tell Bible stories, and he would make them so interesting with his dramatic storytelling. Elroy made his transition home to be with the Lord on October 10, 2021. He leaves to cherish his memory: his wife of 40 years Cleo; his Aunt Rose (Peola) and Aunt Mary; two brothers, Earl and Guy; three sisters, Denise (Curtiss), Diane (Ronald), Deborah; four children, Demetra (Bryan), Fred, Danielle (Clarence), Elroy Jr.; seven grandchildren, Damon, Kayla, Johnathan, Diamond, Bryant, Brielle and Amon; and a host of nieces, nephews, cousins and dear friends

MR. ELROY ROOSEVELT CHRISTOPHER SR. was born on May 6, 1954, in Baltimore, Maryland, to the union of Roosevelt and Eldora Christopher. Elroy Christopher was the second oldest of six children. Elroy was raised in a loving household with his mother,... View Obituary & Service Information

The family of Elroy Christopher, Sr created this Life Tributes page to make it easy to share your memories.

Send flowers to the Christopher, family.