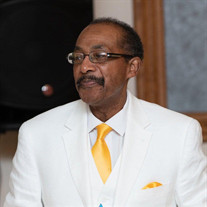 Journey of Life On Tuesday, August 24, 2021 God dispatched his angels to Baltimore, MD with instructions to gently wrap Rev. Elmer Raymond Miller, Jr. in their wings and bring him safely home. He quietly spoke to Elmer saying,"...Sleep on now and take your rest." Matthew 26:45 Elmer R. Miller, Jr., eldest son of the late Elmer R. Miller, Sr. and Edna L. Miller, was born February 23, 1950 in Glen Arm, Maryland. Elmer, educated in the Baltimore County Public School system, graduated from Perry Hall High School in 1970, received his Bachelor of Science degree in Elementary Education from Morgan State University in 1974, and furthered his education at Johns Hopkins University. He was an educator in Baltimore County for more than 25 years and was very much loved by his students and colleagues. After retiring from BCPS, Elmer worked as a Neighborhood Navigator for the Men and Families Center where he addressed the diverse needs of the men, women, and families in the community and provided holistic solutions to assist them in becoming self-sustaining. This work was ministry to Elmer. While attending Morgan State University, Elmer met the love and life of his life, Brenda Johnson. After dating for four years, he asked her parents for her hand in marriage. Brenda and Elmer were married June 25, 1977 and celebrated 44 years. From this union, God blessed them with Sean. Elmer was born into a strong Christian family and accepted the Lord Jesus as his personal savior at an early age. He was a lifetime member of Mr. Zion African Methodist Episcopal Church on Manor Rd. in Glen Arm, MD. There, and everywhere he went, he served the Lord with his whole heart doing whatever good he could. He was called to the ministry and in the 1980's and was ordained. Rev. Miller fervently preached the word of God in season and out of season, compelling souls to come to Christ. He was a doer of the word and put into action the words of Ecclesiastes 9:10, "Whatsoever thy hand findeth to do, do it with all thy might." At Mt. Zion, Rev. Miller served wherever needed, including but not limited to co-pastor, steward, worship leader, choir president, missionary society, health guru, and head of men's ministry. Reb. Miller did all to the glory of God. Elmer comes from a singing family and learned to sing as he learned to talk. At an early age, he and his brothers would sing at home and at church. Elmer, his brothers and brother-in-law Zack, formed The Pilgrim Crusaders and traveled to minister God's gospel and praises in song. Elmer loved quarter music and enjoyed attending programs featuring artists such as the Jackson Southernaires and the Brooklynn All-Stars. On Father's Day of this year, Sean blessed Elmer with tickets to attend a concert featuring one of his favorite quartets, Harvey Watkins, Jr. the Canton Spirituals. He was overwhelmed and filled with joy that day as together they had a wonderful father and son time. Elmer was a man of many interests, an avid bowler who won many trophies and awards. He enjoyed competing and relished demolishing the other teams in league play. His average was 185 with a high game of 297. Elmer also enjoyed classic cars; his pride an joy was a souped-up bright orange 970 Plymouth Road Runner with mag wheels and took pride in cruising around town with Brenda. Elmer's collection of over 100 model cars which he painstakingly assembled is evident of his love for cars. One of his many pleasures was sitting on the front porch and conversing with neighbors. Elmer was preceded in death by his brother Phillip. He leaves to cherish his memory: his loving and devoted wife, Brenda; the apple of his eye, son: Sean and daughter-in-law, Linda Johnson Drumwright, Joyce Johnson Bowers; four aunts: Blanche Harvey, Betty Nolan, Ruth Miller, Gertrude Miller; one uncle-in-law, Monroe Smith, Jr.; a devoted cousin: John Miller (Nancy); nieces and nephews: Michele (Willie), Tammy (Tony), Tonya (Carnell), Marsha, Christopher, India (Edward), Phillip, Stanley, Keyon, Stacey, Erika (Albert), Mika (Pierre), Tameka, Angelique (David); a host of great-nieces, great-nephews, great-great-nieces and nephews, cousins, god-children, many other relatives and friends and his beloved 6:00 a.m. prayer warriors, the Men of Valor.

Journey of Life On Tuesday, August 24, 2021 God dispatched his angels to Baltimore, MD with instructions to gently wrap Rev. Elmer Raymond Miller, Jr. in their wings and bring him safely home. He quietly spoke to Elmer saying,"...Sleep on now... View Obituary & Service Information

The family of Rev. Elmer R. Miller Jr. created this Life Tributes page to make it easy to share your memories.

Send flowers to the Miller family.