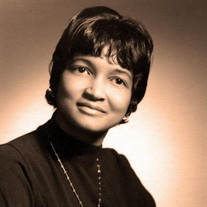 Elease (Hamilton) Hayes, age 87, of Baltimore, MD, passed away on January 29, 2022, at the Grace Medical Center five days after her birthday with family at her bedside. She was the daughter of Oscar (1898-1970) and Essie (Little) Hamilton (1909-1991). She was preceded in death by her husband Robert Lee Hayes (1913-2006), parents, sisters, Ruby Lee Hamilton, Marle Hamilton, Vernisha Hamilton, Sylantha Hamilton, Kenitha Hamilton, Louise Hamilton, Annie Pearl Hamilton, Marie Hamilton, and her brothers, Mackeever Hamilton, Oscar Hamilton, Artis Hamilton, Lonnie Hamilton, Robert Hamilton, and L.B. Hamilton. Elease was born on January 24, 1935 in Chesterfield, South Carolina. She received her early education at the Colored School. As a young lady, Elease moved to Norfolk, Virginia, where she worked in the nursing field. She later relocated to Baltimore, Maryland where she started her family and met her beloved husband. Elease had a strong sense of discipline and work ethic. This was instilled in her and her siblings at a very young age, as they toiled daily, on the family farm. This industrious upbringing led to her lifelong practice of always starting her day at the break of dawn. Elease also had a strong conviction for justice and advancement of blacks in America, which stemmed from her experience of racial injustice in the south. This was demonstrated by her involvement as a lifelong supporter of the NAACP. Elease enjoyed diligently keeping an immaculate home. She loved sewing, crocheting, and working on many arts and crafts projects. She would affectionately call her hobbies, “just peddling around”. Elease was a strong, independent, intelligent and wise woman. She worked tirelessly to instill these same qualities in her children for generations to come. Elease was the true embodiment of a family matriarch. She is survived by two sisters, Bettie Hamilton, and Cindy Hamilton. Her children, Cynthia (Jones) Staton, Jim Staton, Gregory Jones, Carla Jones, Linda (Jones) Guy, Anthony Guy, Eric Roberts Jones and Nina D. Davis Jones. Grandchildren Eureka (McNeil) Asli, Tierra (Guy) Clerge, Nesly Clerge, Gregory Jones, Courtney Jones, Eric Mandez Jones and Rhonda Campbell. Great-grandchildren Nasir Asli, Tristin Webb, Nesly Clerge Jr., Kayden Clerge, Jaliyah Williams, Lyric Jones, Eric Maurice Jones, Lamar Jones, Valarie Jones, Gregory Jones Jr., Chloe Clerge and countless nieces, nephews, great nieces and great nephews. In lieu of flowers or donations, Elease would have liked for the ones she loved to go out and appreciate the day, a sunset, or a long country drive; hug a loved one you miss, or to call someone who misses you. She would want you to simply appreciate life and love your family and friends, because as she always said, “we did not come here to stay”.

The family of Elease Hayes created this Life Tributes page to make it easy to share your memories.