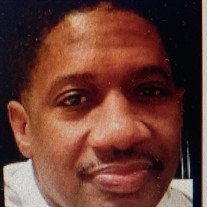 On February 10, 2022, God sent His angels to bring home His precious child, ELBERT LEE EDMOND, JR. He was born on September 30, 1963in Baltimore, Maryland to the late Elbert Lee Edmond, Sr. and Shirley Edmond. Along with his father, his sister, Elise Edmond also preceded him in death. Elbert, Jr. received his education in the Baltimore City Public School System and graduated from Mergenthaler Vocational Technical High School in1981. He also attended the RETS Technical Institute’s Trade School and was employed with Display Crafters for over 20 years. At an early age, Elbert, Jr. gave his life to Christ and was baptized at Harlem Park Community Baptist Church in West Baltimore. Later in life, he joined United Baptist Church under the leadership of Dr. Carl J. Solomon, where he served on the Diaconate Ministry and the Trustee Board. He was more than just a member at United. He was also known for volunteering his time as a church ‘handy man’ doing odd jobs like painting the white lines in the church’s parking lot to ﬁxing lights throughout the church building. He loved his church and his church family. Elbert Jr., entered into marriage to Gail Reid, who preceded him in death. From that union, Elbert Edmond, III was born. He later married Pamela Hunter and that union ended in divorce. Elbert Jr., JR, as he was affectionately called by family and friends, was very family oriented, fun loving and easy going. He was also a loving father to Tray and a doting grandfather to Payton and Arielle, who called him “Pop Pop”. He loved taking them out to eat, picking them up from school and taking them back and forth to practices and other activities. He also enjoyed hanging out with close friends, Rudy Holley and Corey Dudley. He was also an avid sports fan. He could often be seen at Baltimore Orioles baseball and Baltimore Ravens football games. JR was loved by all who knew him. He will be missed greatly. Elbert Jr., leaves to cherish his memory: his mother, Shirley Edmond; his sisters, Elizabeth Edmond and Marilyn Neal (John); one son, Elbert L. Edmond III (Candace); grandchildren, Payton Edmond and Arielle Edmond; nephews, Stanley Lyles Jr., Travis Lyles (Sequoia), Cameron Neal (Evelyn) and Daunte Neal (Nicole); nieces, Tiffany Lyles and Kendra Neal; along with a host of aunts, uncles, cousins and friends. He also had a special love for his great-nieces and great-nephews.

On February 10, 2022, God sent His angels to bring home His precious child, ELBERT LEE EDMOND, JR. He was born on September 30, 1963in Baltimore, Maryland to the late Elbert Lee Edmond, Sr. and Shirley Edmond. Along with his father, his sister,... View Obituary & Service Information

The family of Elbert L. Edmond created this Life Tributes page to make it easy to share your memories.

Send flowers to the Edmond family.