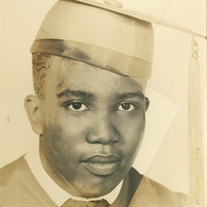 EULOGY Edward Lee Jones January 19, 1932 – December 10, 2021 Ed Jones, born and raised on Shepard St., Petersburg, VA, was the son of Edward L. Jones & Jenny B. Twyne. Ed is survived by his niece, Marie Brown of Gainesville FL, and nephew, Michael Curtis of La Junta CO. Ed’s father served in Theodore Roosevelt’s “Rough Riders” in the Spanish-American War in Cuba; and fought in the battle of San Juan Hill. Unfortunately, he died before his son, Ed, ever knew him. Ed grew up under the loving influence of his mother and the Gillfield Baptist Church and the famous reverends S.A. Brown and Wyatt T. Walker. Ed’s mother always took care of people – family, friends and strangers alike, regardless of race. The two reverends introduced Ed to Rev. Martin Luther King, Jr.; and their influence, along with his mother’s, shaped Ed’s life of service. Ed spent his early years working in his uncle’s shoe repair shop; and after graduating from high school, Ed served in the U.S. Army 1952-54. He then went to Alabama State University where he studied for three years. He lived in Selma and Montgomery; and was with the civil rights marchers who were beaten and jailed in Selma. He worked with Dr. King at the Dexter Baptist Church, and helped with distributing food. This experience also helped to shape Ed’s life of service. Upon returning to Petersburg, Ed attended Virginia State University where he earned his certificate as a physical therapy trainer. He also worked for twenty years at the Virginia State Hospital, on the janitorial staff, from where he retired. It was during this time that Ed found the Baha’i Faith and was attracted to the principles of the unity of mankind, the unity of the religions and all under one God; and he continued to spend the rest of his life working towards the goal of service to others and justice. He spent every day of his retired years driving around Petersburg delivering food to the needy. Ed’s only leisure time was playing tennis, which he loved and taught to his niece and nephew. He played tennis even in his eighties. Ed’s final years were spent at The Envoy on Forest Hill Ave., where he received kind and expert care. Ed’s racquet is in his coffin with him. He will surely continue to play tennis and serve in the next world. God bless!

The family of Edward Lee Jones created this Life Tributes page to make it easy to share your memories.