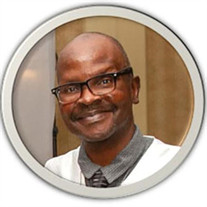 Matthew 25:21 “His master replied, ‘Well done, good and faithful servant! You have been faithful with a few things; I will put you in charge of many things. Come and share your master’s happiness!” Early Friday morning, August 13, 2021, God, in His infinite wisdom whispered the name, EDWARD KENNETH FISHER, our beloved brother, uncle, and friend, and welcomed him home to a sweet celestial palace. Heaven is rejoicing at his arrival into the peaceful Kingdom of the Lord. “His Birth” Genesis 2:7 “Then the LORD God formed a man from the dust of the ground and breathed into his nostrils the breath of life, and the man became a living being.” Born on August 20, 1955 in Baltimore, Maryland, Edward Kenneth Fisher–affectionately known as “Kenny”- was the youngest of five beloved children of his parents, the late George and Cecelia Fisher. Kenny prided himself on the family values instilled in him by his parents. These family values included gatherings for birthdays and holidays, and special occasions. Especially important was keeping open and close communication. Kenny held steadfastly to these values by regularly checking in with his siblings to see how they were doing. “His Life” Colossians 1:10 “So that you may live a life worthy of the LORD and please him in every way: bearing fruit in every good work, growing in the knowledge of God” Kenny was educated in Baltimore City Catholic and Public Schools. Following graduation, Kenny worked for a number of years at a day care center where he enjoyed teaching and assisting preschool children. Later, he worked at Mercy Hospital in the housekeeping department. Kenny’s passion was assisting others and being of service to his family, friends and community. After he retired, Kenny volunteered at the Keswick Multicare Center where he enjoyed interacting with the patients and staff. During election seasons, he volunteered as an Elections Judge, and he was a member of the Upton Planning Council. “His Spirituality and Place of Worship” John 14:6 Jesus answered, “I am the way and the truth and the life. No one comes to the Father except through me. Kenny knew and LOVED the Lord! It was evident in the life he lived and in his knowledge of the Bible. It was truly amazing how Kenny could quote scriptures, and how he could tell you so vividly about Biblical characters. If you ventured to his apartment ~ you would consider it a Biblical Shrine. Kenny had pictures of Jesus posted on several walls. The bathroom and living room walls were full of scriptures, prayers, and biblical quotes and references. When Kenny would text his niece, Tanya, he would always end by saying “May the Lord bless you real good.” Kenny was an active member of Pennsylvania Avenue AME Zion Church under the leadership of Reverend Milton A. Williams, Jr. He served his church faithfully and eagerly as a member of the Brotherhood (Men’s Ministry), the Security Ministry, the Thursday Night Prayer Call, and the Christian Education Call. Kenny attended Bible Study on a regular basis, and it was said that Kenny was extremely inquisitive and focused, and he asked a lot of questions. Kenny was nicknamed “Eating Fisher” ~ we all know how Kenny loved to eat! Since the beginning of the year, Tanya was blessed to have her Uncle Kenny join her weekly on Zoom for Bible Study at her church, Community Outreach Ministry (COM). Kenny fit right in with the group and they embraced him with open hearts and open arms. Because of his special spirit, Kenny soon became everyone’s uncle and was given the honorary name, “Uncle Kenny”. During Bible Study, participants were paired with a partner to complete homework assignments. Kenny was really elated when he was partnered with the COM’s Pastor, Pastor Arnel Marshall. Not long ago, Kenny had the pleasure of attending two outdoor services at Community Outreach Ministry. Kenny raved about how much he enjoyed the fellowship and how he couldn’t wait to return. “The Legacy He Leaves Behind” 1 Samuel 20:18 “Then Jonathan said to David, “Tomorrow is the New Moon feast. You will be missed, because your seat will be empty.” Kenny leaves to cherish his memory: His sisters, Arlene Fisher and Helen Childress; his brothers, Carl Fisher and Earl Fisher; his nieces, Minister Tanya Howze (Terry) and Keita Fisher; his nephews, Anthony Price and Brian Evans; his great nieces, TaDawn Bowman, Destiny Rivers, and Myranda Perkins; his great nephew, Bryce; a special friend, James Smith; his Pennsylvania Avenue AME Zion Church family; and many loving friends and neighbors

The family of Edward Kenneth Fisher created this Life Tributes page to make it easy to share your memories.

Send flowers to the Fisher family.