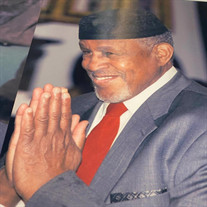 Edward Barnes was born to the late Mary and Rufus Barnes of Norfolk, Virginia; and was the fourth child of nine children. Edward attended the Public Schools in Norfolk, Virginia and always had a strong desire to learn everything that he could. Edward was affectionally known as “Ed.” As a young teen and an active youth in the community, Ed soon became the leader of the youths and teens. He was loved, respected and family oriented. Ed assumed the task of making sure that everyone from his community arrived at home safely from school every day without being bullied. Ed called himself the “look-out” kid. Ed re-located to New York at the age of twenty-one. Shortly upon his arrival in New York, he was employed by Trailway Bus Company as a bag handler. Initially, he served at the “Shop Stewart” in the baggage department and later became the president of their union. Ed became concerned when he saw that there were no “people of color” working as ticket agents. This practice disturbed him greatly and he was motivated to do something about it. After much thought, Ed was decided to organize in an effort to resolve this obvious problem. He met with people that he knew would be willing to help. Together, they agreed to the strategy Edward presented to them. The plan of action was to borrow a page from Adam Clayton Powell’s play book which was to purchase all tickets with pennies only. After several meetings with more than fifty penny ticket purchasers, they decided on the day and time to come to the ticket office to purchase tickets. In the meantime, the plan was for each participant to purchase their ticket(s) with $100.00 in pennies. On the day of action, they showed up to purchase tickets with their pennies which presented a major problem in the ticket office. The long, long line which extended far outside of the ticket office door caused ordinary ticket purchasers to become agitated and angry because of the long wait. Many of them left the line and did not purchase tickets at all. This of course had a great impact on the sales for that day; and shortly thereafter, management decided to allow “People of Color” to work in the ticket sales office. As a result of this action, Edward became one of the sales persons assigned to work in the ticket office at Trailway Bus Company. The New York Amsterdam News of May 6, 2003, featured Edward who became known as “Bad News’ Barnes, with a PhD in Picketing” was the headline in the newspaper article. Following his successful achievement, Edward left the Trailway Bus Company after nine years of service,and joined the staff with the United Federation of Teachers as a Union Representative Field officer for the teachers’ union. Ed’s reputation followed him to the Teacher’s Union. Shortly, Ed became known for his tenacity and hard work. He was often sort after by teachers whose jobs may have been in jeopardy. As an avid reader, Ed read several newspapers each day. He became very familiar and was proficient with the information contained in the teachers’ contract; and memorized it from cover to cover. Many teachers successfully won their cases through the efforts of “Bad News Barnes.” After having had a successful career, Ed retired from the Teacher’s Union as a Field Representative after serving in that position for more than twenty-five years. Ed accepted Christ as his personal Savior at an early age; and became an active member of Mount Pisgah Baptist Church in New York under the leadership of Bishop Johnny Ray Youngblood. The distinguished honor of “Elder Emeritus” was bestowed upon Ed by his Pastor and the Church Family two years ago. In the meantime, Ed joined The National Action Network (NAN) in New York under the leadership of Rev. Al Sharpton; and served as a Court Patrol Leader with NAN for nearly ten years. In September, 2017, Ed decided to re-locate to Maryland to be near his sister, Mrs. Ruth Barnes Nixon and his brother-in-law, LTC (USA (Ret) Paul L. Nixon and the rest of the family following the death of his younger sister, Mary who also lived in New York. Ed was preceded in death by: The late Mary and Rufus Barnes, Sr; Sisters: Dorothy Barnes Hargett; Mary L. Barnes. Brothers: Rufus Barnes, Jr.; William C. Barnes, Irvin L. Barnes, Alvin E. Barnes, and Samuel Barnes. Ed is survived by his daughter, Anita Linett Barnes of Oakland, CA; his Son, Eugene (Sonny) Barnes of Chesapeake, VA; his former Wife, Gloria Stewart of Chesapeake, VA; and Sister: Ruth Barnes Nixon (Paul) of Bowie, MD. Nieces: Tamra B. Grant of Suffolk, VA; Cynthia Ann Smith of Suffolk, VA; Tracey Bass of Stamford, CT; Terri Richardson of Bridgeport, CT; Anita Barnes Jackson of Philadelphia, PA; and Sabrina Barnes of White Plains, NY. ` Nephews: Therian W. Johnson, Jr, (Gina) of Fulton, MD; Darryl Barnes of Roselle, NJ; Fernando Barnes of Miami, FL; Ervin Barnes of Washington, DC; grand nieces, nephews, cousins, extended family members and a host of many friends and acquaintances. Even though our hearts are sad, we have comfort in knowing that “God does not make a mistake;” He wanted another servant to join His Kingdom. Rest in Jesus my dear brother, we love you, but God loved you best.

Edward Barnes was born to the late Mary and Rufus Barnes of Norfolk, Virginia; and was the fourth child of nine children. Edward attended the Public Schools in Norfolk, Virginia and always had a strong desire to learn everything that he could.... View Obituary & Service Information

The family of Edward Barnes created this Life Tributes page to make it easy to share your memories.

Edward Barnes was born to the late Mary and Rufus Barnes of Norfolk,...

Send flowers to the Barnes family.