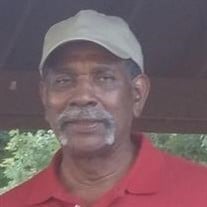 Eddie was born on April 14, 1952, in Seaboard. North Carolina. He entered eternal rest on March 16, 2022, at his home in Mechanicsville, Virginia surrounded by loved ones. He was preceded in life by his loving wife, Christine Brown; father, Wilbert Brown; mother, Lucille Brown-Johnson; brothers, George Brown and James Henry; and sisters, Mary Delotch, Armenta Ash, and Louise Lofton. He was employed by Nabisco Company and retired after 30+ years of service as a Machine Operator. Eddie would leave work every day smelling like Oreo cookies. In his younger years, he was a singer/songwriter and was a member of Willie Jones and the Gospel Sensations. He had a love for race cars and spent many days at the Richmond Raceway or the racetrack in New Kent County. He didn’t mind showing off his Classic Camaro either. Eddie was an avid Dallas Cowboys fan, no matter how bad they would lose at the end of the season, he kept his faith in his team. Later in life, he loved to travel with his departed wife Christine. They enjoyed a good restaurant and were inseparable. He would never turn down Snow Crab Legs or a good piece of pork. Bring him a piece of Souse Meat and his day was made. He also spent a lot of time with his family and close friends. His love and devotion to his brothers and sisters were amazing to watch and they were never too far away from each other. He leaves to cherish his memory his daughters, Cynthia Brown, Andrena Brown, Jewell Brown and Alexus Brown; son, Eddie Brown Jr. and stepson, Duane Taylor; brothers, Wilbert Brown (Joyce Brown), Willie Brown (Clara Brown), Thurmon Brown (Theresa Brown), Ervin Brown (Linda Brown) and John Brown; brothers-in-law, Glen Taylor, and Gilbert Taylor; sisters, Lula Smith, Martha Boone and Lucille Booker; sisters-in-law, Vicky Rose and Mary Walker; 14 grandchildren, 9 great-grandchildren; and a host of nieces, nephews, other relatives, and friends. Eddie was easy-going, independent, and respectable. Those baby blue eyes would immediately capture your attention. He was a father, grandfather, brother, uncle, and friend. We will miss him dearly and hold his memory forever in our hearts.

Eddie was born on April 14, 1952, in Seaboard. North Carolina. He entered eternal rest on March 16, 2022, at his home in Mechanicsville, Virginia surrounded by loved ones. He was preceded in life by his loving wife, Christine Brown; father,... View Obituary & Service Information

The family of Eddie Louis Brown, Sr. created this Life Tributes page to make it easy to share your memories.

Send flowers to the Brown, family.