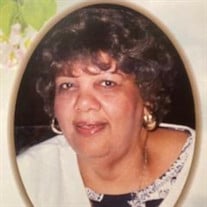 EARNESTINE HARVEY BOONE, the second child of six born to the late William, Sr. and Minnie Harvey was born on December 20, 1934 in Baltimore, Maryland Her oldest sibling, William Harvey, Jr., preceded her in death. Earnestine peacefully transitioned from this life on July 22, 2021 After enduring many health challenges, God then called her home to rest. Earnestine was raised in a home where there was a creed based on establishing a solid Christian life and receiving a good education. She accomplished both in her lifetime. She was introduced by her parents to St. Philip’s Evangelical Lutheran church during her early childhood. She embraced the Lutheran Doctrine and remained a faithful a faithful, active member. Earnestine would end her day by listening to audio recording of scriptures. She enjoyed going to church to hear the teachings of the sermons, the musical selection, and also sharing her ideas with her church family and friends. She attended Paul Laurence Dunbar High School and after graduating in 1953, she applied and was accepted in the City Hospital Practical Nursing Program. She lived in the residence for the where she friends met new friends and for first time experienced living away from home. She proudly earned her degree in Practical Nursing in September of 1956. After graduating, Earnestine joined the nursing profession at City Hospital, (now known as Bay View Hospital). She met Preston Boone in 1953, for he was one of the friends she met as a student nurse. He said he saw her and couldn’t keep his eyes off of her. He got her attention and from there he became the one and only love of her life. Earnestine and Preston were married August 15, 1957 by Pastor Francis B. Smith, the then pastor of St. Philip’s Lutheran Church. Preston Boone, her husband her beloved husband departed from this life in November of, 2018. From the union of Earnestine and Preston, three children were born; Preston Jr., Jolisa, and Brandi. Earnestine, like her mother, Miss Minnie, encouraged her children to establish good Christian lives and continue their education. To help ensure their success, she became a stay-at- home mom. As a stay-in-home mom Earnestine enjoyed every minute of every activity. As her children got older and progressed in school, Earnestine became involved in different projects outside the home. She ceramic classes and she designed T-shirts. She became employed in the Baltimore city Public School System as a substitute teacher. She also worked in summer in the Baltimore City Public school system’s Summer Work Program supervising the youths who were assigned to the Waters Towers’ worksite. To bring joy and happiness to her children, Earnestine and Preston would always take the children each summer on vacation trips to various places. Earnestine would always talk about the cruises she and Preston took The best loved vacations were the cruises because she and Preston enjoyed the activities and the people they met. One of her accomplishments she was very proud of is the book she wrote entitled, Living on the Hill. The book reflects her insights of East Baltimore where she was raised. You can find her book in the East Baltimore Historical Library. Not only was Earnestine devoted to her children, she adored her grandchildren. Chucky Cheese and the Baltimore Zoo saw a lot of them. Those were the two Favorites places she would take them. She brought a family membership to the zoo, and if Chucky cheese sold memberships, she would have been the first in line Every Christmas, she took them all to the live theater to see The Nutcracker ballet. She took them to different places to help them to be well rounded. Everything she did with them and for them was based on her love for her husband, children, grandchildren, and great-grandson. She leaves to mourn and cherish her memory: her devoted children, Preston Boone, Jr (Effie), Jolisa Boone-Simms, and Brandi Boone-West (Gary); her four grandchildren, Preston Byron Boone III (Jamie), Kenneth Leron Simms, Breyonna West and Britney West one great-grandson, Troy Jalen Simms; her siblings, Carl Harvey (Delores), Freddie Harvey, Christine S. Phillips And Kerliene Harvey Johnson; five nephews, Arvis Harvey, Steven Harvey, Rainer Harvey (Robin), George F. Phillips and Christopher S. Phillips (Cheryl); three nieces Soraya Harvey, Ariyan Johnson, Khy-Lynn Johnson; sisters-in-law, Yvonne Dean Harvey and Helen Griffith; an uncle, Jerry Perry; an aunt, Shirley Perry Robinson; and her best friend Gladys LaPrade; and a host of other relatives and friends.

The family of Earnestine Boone created this Life Tributes page to make it easy to share your memories.

EARNESTINE HARVEY BOONE, the second child of six born to the...

Send flowers to the Boone family.