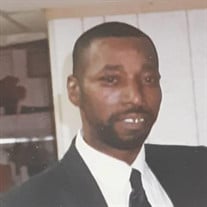 “I have fought a good fight; I have finished my course, I have kept the faith.” - 2 Timothy 4:7 EARL KEVIN SUTTON FOOTE was born on May 3, 1954 in Lusby, Maryland. He was the oldest child of Carolyn E. Dunnmoodie. On March 22, 2022 at Sinai Hospital of Baltimore, he quietly exchanged his earthly body for a heavenly robe. To his devoted family, Earl was affectionately known as Kevin but to his neighborhood friends he was called Leroy or Foote. Kevin resided on Madison Avenue before moving to Towanda Avenue. Many have questioned how he came to be called Leroy. When he moved into the neighborhood, Kevin refused to tell the children his name so they gave him one. Even now, some fifty years later many of the neighbors did not realize his name was Earl. Kevin was a loving and quiet person. He was never without a smile that made his nose crinkle when he greeted family and friends. Kevin was frequently seen greeting the neighbors as he strolled throughout the neighborhood. Kevin received his formal education within the Calvert County and Baltimore City Public School Systems. He also received vocational training and his high school diploma while a student at the Job Corps. Kevin’s professional career included the General Motors Corporation but his passion was driving commercial vehicles. At the time of his passing, Kevin was employed for many years with Ernie’s Moving and Hauling. As a teenager, Kevin was an excellent baseball player. He was a dedicated sports fan. On many occasions you could find him with the neighborhood children playing ball at the Towanda Recreation Center. Kevin’s favorite teams were the Baltimore Ravens and the New Orleans Saints. Kevin leaves to cherish his memory his mother, Carolyn E. Dunnmoodie; loving sisters, Berdeva Slater, Sherry Downs and Cynthia Foote; daughter, Shakeria Coleman; granddaughter, Sevyn Camp; his niece, Alicia McNeill; grandnephew and grandniece, Desmond and Mikayla McNeill; brother- inlaw, Charles Downs; his lifelong friend, Robin Tiggle; loving companion, Bessie Davis and her two children, Linwood Nicolas and Enriqueta Davis; aunts, uncles, cousins and a multitude of friends.

The family of Earl Kevin Sutton Foote created this Life Tributes page to make it easy to share your memories.

“I have fought a good fight; I have finished my course, I have...

Send flowers to the Foote family.