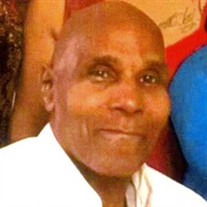 Douglas Everetter Christian, Jr., affectionately known as Doogie, son of the late Douglas E. Christian, Sr. and the late Ruth H. T. Christian, was born November 4, 1958 in Baltimore City. He was Called to glory on December 29, 2021. Douglas was educated in the Baltimore City Public School System. He attended Carver High where he was a stellar Defensive Lineman. Later he attended Baltimore City Community College where he received Certificates of Training in the areas of information technology, basic skills, and transportation. Douglas served in the United States Army as a cook. After almost three years of service, he was honorably discharged. Douglas held a variety of positions during hiss career. Some of his accomplishments were custodian, technician for the City of Annapolis, and Chauffeur for the Mayors Office. Douglas was preceded in death by his former wife, Evelyn A. Whye, his brother, Charlie E. Christian, and his sister, Esther Carr. Douglas will be remembered for his loving spirit and uproarious laughter. He enjoyed a variety of music and when he sang, it made you smile. While he did not have children, he enjoyed teaching his nieces, nephews, and cousins how to play football, basketball, baseball, “trolls in the woods” and the infamous “Buck-Buck Competition.” A true favorite uncle, cousin, and friend to them all. Dougas is survived by his stepchildren Evelyn Nash and Robert Nash; his siblings, Nathaniel Christian (Hermalinda), Naomi Christian, Michael Christian (Sharon), Janice Christian, and Theresa Davis; one aunt, Hattie Harris, and a host of nieces, nephews, cousins, and friends.

The family of Douglas E. Christian created this Life Tributes page to make it easy to share your memories.

Send flowers to the Christian family.