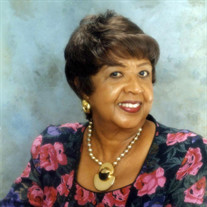 Dorothy Jones Northern was born October 22, 1929 to Clarence Clifford Jones and Viola Madison Jones in New Rochelle, New York. She was the third of 5 children. Her parents raised their family with strong Christian values as Baptists. Educated in the Westchester County, New York, Public School System, Dorothy excelled as a classical pianist at a very young age. She was born into a lineage of pianist, playing in countless musical recitals at her Aunt Loretta Madison’s, School of Music in New Rochelle, NY. Upon graduation from A.B. Davis High School in Mt. Vernon, NY, she entered Fisk University in Nashville, Tennessee as a music major, and later transferred to West Virginia State College, in Institute, West Virginia. After college, Dorothy moved to Baltimore, MD and was employed with Progressive Insurance Company. She later married James Northern, and had two daughters, Shelley and Susan. Dorothy returned to New York as a single parent with Shelley, age 4, and Susan, nine months; and then, began her career path at Kulka Electric Corporation in Mt. Vernon, New York. She rose from receptionist to computer programmer, and held that position until she retired. Affectionately known as Dottie, she exuded a quiet elegance and grace throughout her life. She cherished her family and was a dedicated daughter and traveling partner to her mother Viola. The Caribbean and West Indies were their favorite destinations. Dorothy’s daughters, Shelley and Susan, were now raising their own children in Maryland; and right before the birth of her fourth grandchild, Alicia, she relocated back to Maryland to be near her grandchildren. She was blessed to experience them thrive into adulthood. Our Lord, Jesus Christ, called Dorothy home on April 8, 2021. She succeeds both parents and her four siblings, Charlie, Elaine, Cliff and Andy. She leaves to mourn her death, daughter Shelley Jennings, son-in-law Joseph, granddaughters, Camille and Courtney, daughter, Susan Davis, granddaughter, Alicia Louise, grandson, Jordan, and wife, Adina, and great-granddaughter, Skylar Noelle. Extended family includes cousin, Andrew Madison, and wife, Taj, brother-in-law, Scott Heckstall, sister-in-law, Yvette Jones, nephew Jeffrey Heckstall and wife Jetta, nephew, Brian Heckstall and wife Kim, niece Gail Atwater and husband Peter, and niece, Tracey Jones Dedicatoria. There are additional generations of nieces, nephews, and cousins, countless family friends, and Dorothy’s childhood friend, Gertie Brown of New York. May Dorothy’s memory bring comfort to those who loved her. And, may she rest in peace.

The family of Dorothy Northern created this Life Tributes page to make it easy to share your memories.

Send flowers to the Northern family.