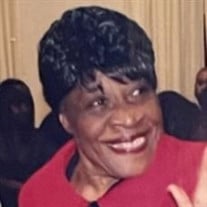 DOROTHY ANN HARRIS daughter of the late Arthur Ridley and Corine Harris-Perry, was born on December 18th 1929 in South Hampton County Virginia. Dorothy peacefully entered into eternal rest on Tuesday, June 1st, 2021 at the age of 91 years old. Dorothy was raised and educated in Baltimore, Maryland before returning back to Virginia at the age of seventeen. During her time in Virginia, she married Lee Jones who preceded her in death. She was a strong and determined woman, a dedicated hard worker. She worked as a caregiver for many years. Dorothy was affectionately known to her family and friends as "Moma", "Dot" or "Mrs. Jones". Dorothy was the matriarch of her family. She was a fun and loving Mother and Grandmother. Her seven daughters were her life. Even more than a mother to her children and grandchildren she was a friend. She would always say, "I'd rather you all do it in here with me than out in the street". Dorothy Ann loved holidays and family get-togethers; any chance to spend time with her family was important to her. She would spend hours cooking and preparing for her company even her children's company. Everybody was welcome in Moma's house. She taught her children and grandchildren how to smile through adversity. There was never a birthday or special event that she did not remember. You could always depend on receiving a holiday card, birthday card and gift from her. Moma had many interests and hobbies. She loved playing cards, planting flowers, collecting pictures, and listening to her music. "Its time for the percolator" was sure to get her dancing at any event. Moma enjoyed hosting events like Disco's dinners and cook outs. If you ever gave her a picture she was sure to find a frame for it and hang it somewhere in her home. She took pride in ownership and handling her affairs. She shared her wisdom and encouraging words to all of her loved ones. She knew that God was watching over her. Her love, kind and genuine concern for her family and friends will be missed. Dorothy Ann leaves to cherish, three brothers, Thomas, Curtis and Larry, ten sisters, Eunice, Eliza, Helen, Hazel, Doletha, Earnestine, Susan, Sandra, Yvonne and Rosa, seven daughters, Deborah, Delores, Lynda, Joyce, Brenda, Corine and Patricia, 15 grandchildren, 41 great grandchildren and five great great grandchildren, a special Randolph Bynum, two brothers and one sister and two great grandchildren who have proceeded her in death, AK, Richard, and Bea, host of nieces, nephews other relatives and friends.

The family of Dorothy Ann Harris created this Life Tributes page to make it easy to share your memories.